It has been quite some time since we posted a recipe on this blog. To be honest, we were just cooking more of the mundane stuff, and were not experimenting as much. However, all that changed one Sunday when I decided to cook what Gordon Ramsay would call a curry-house classic: Chicken Korma.

It’s a sweeter, more mellow version of the chicken curry that we know of, and can be eaten with both rice and various kinds of Indian flat-bread.

So get your toque – not to be confused with a toke – on, your spices and ingredients out and your utensils ready for one helluva curry ride!

Wash the chicken well. Put it in a deep container. Add the curd, and half of the following: ginger-garlic paste, cumin powder, coriander powder, garam masala and red chilli powder. Add salt and a dash of vinegar.

Mix everything well, making sure that the marinade penetrates well into the chicken. Now freeze the mixture for at least a couple of hours.

This is essentially the most important part of the cooking process. A weak, undercooked base masala or spice combination can be the difference between a mouthwatering delicacy and a soggy, bland dish.

First, get your onion and tomatoes ground to a paste. Like so:

As that is done, heat the oil on a medium flame, and add the whole spices – the cumin seeds, the cardamoms, the cloves, and the cinnamon sticks. Let them sputter around and release their flavours a bit. Don’t let them burn, though.

Then, add the onion paste. Be careful about the sputtering. The water released by the onions and the hot oil do make a volatile combination, if “volatile” is indeed the word for it. 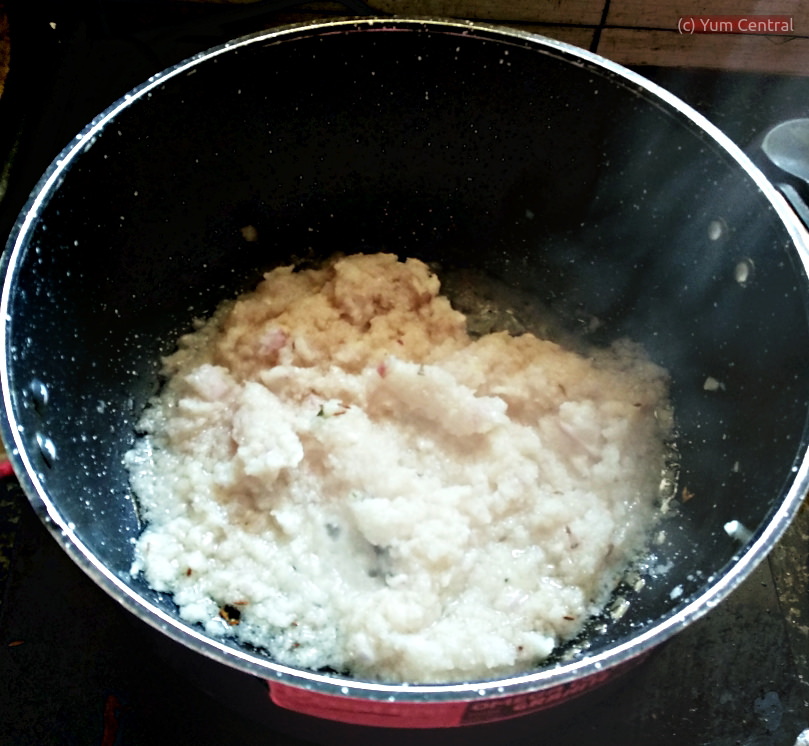 As the onion releases more water and starts to reduce, add the rest of the ground spices – coriander powder, cumin powder, red chilli powder and garam masala – and salt and stir to mix them well.

The resulting mixture should start to look like an ochre shade, and start reducing further.

I added the ginger-garlic paste at this point, but you can add it well before adding even the ground spices. Mix this well, and that typical “Indian curry” smell should start by now. 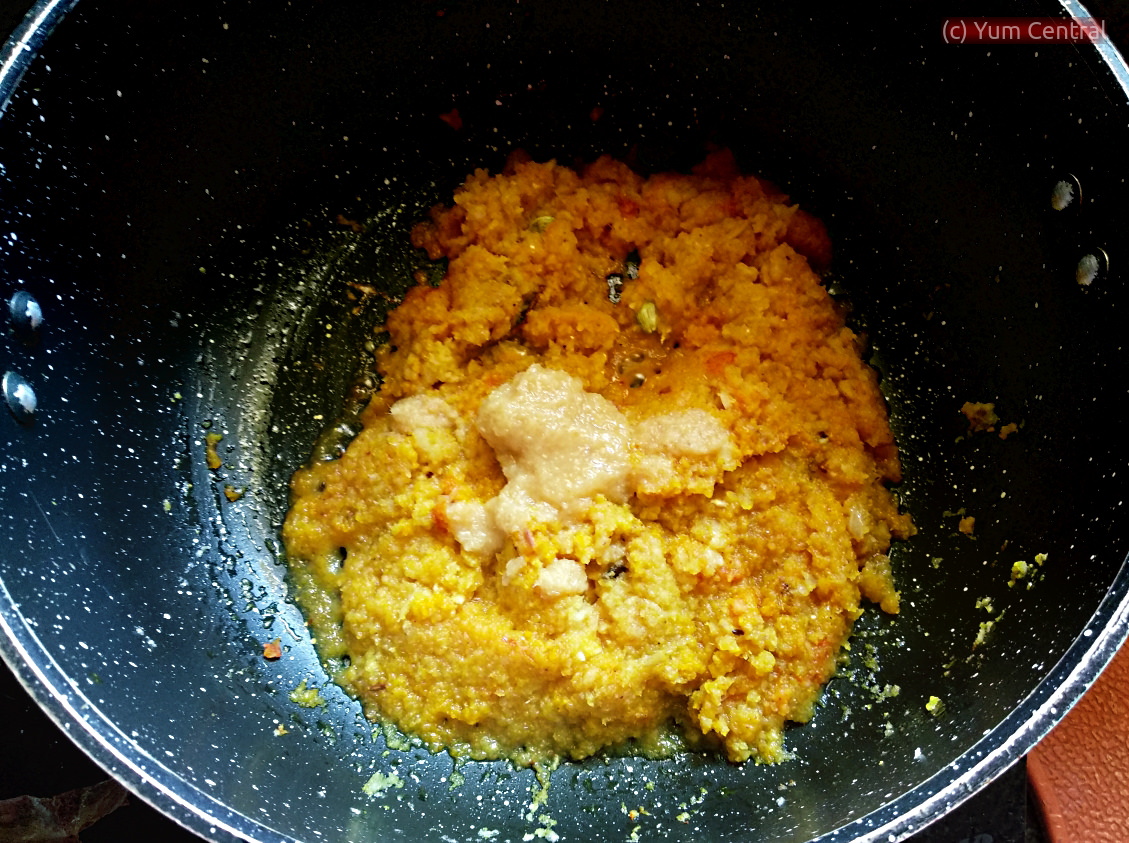 Stir till things get reduced a bit further. 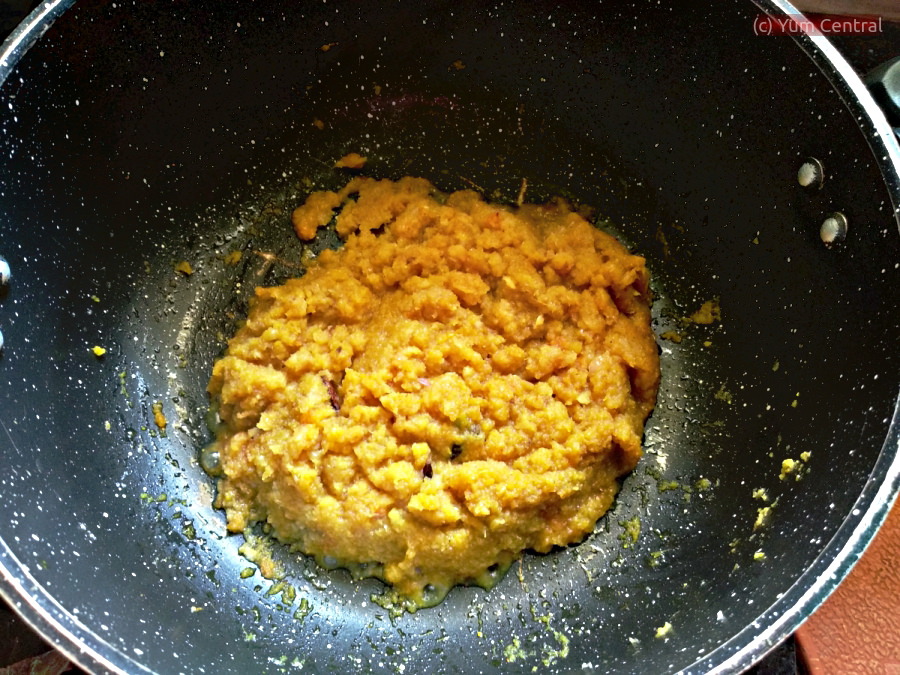 Now add the tomato paste, and stir well to get things mixed. 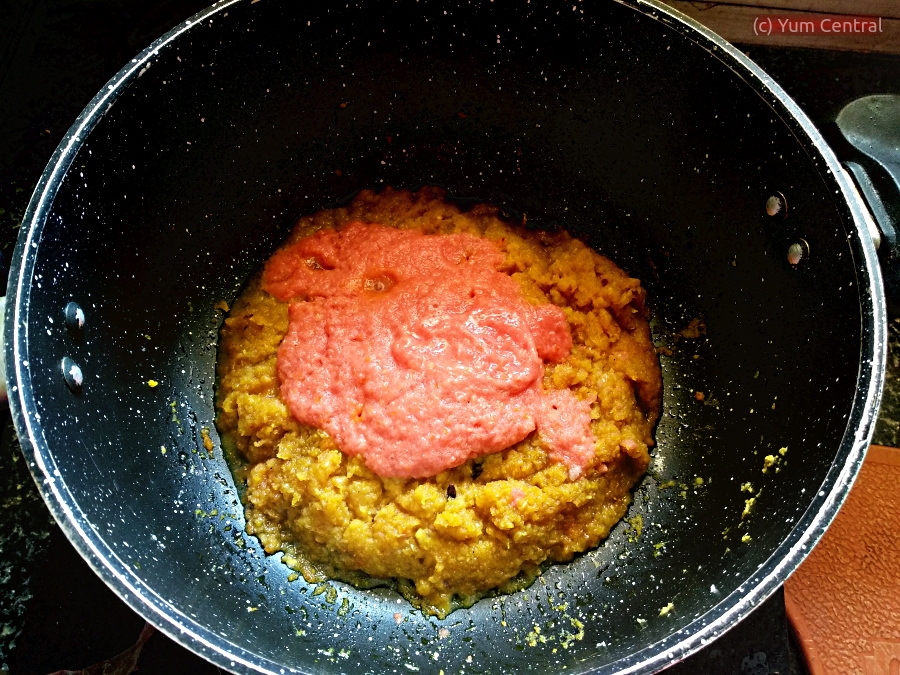 It might be a good idea to turn the heat up a notch or two and let your masala reduce even further. Keep stirring so the masala doesn’t burn. But don’t be so fast that the masala does not acquire a smoky flavour from the heat.

The result now should be a brown mixture.

The funny thing is, you can make this masala in large batches and store some of it in the refrigerator for at least a week or two. It may lose some of its flavour, but still retain quite a bit of taste.

With your base ready spread it across the bottom of your utensil. Turn down the heat to low-medium. Bring out the chicken and lay the pieces on the masala. Let the chicken soak in some of that flavour. 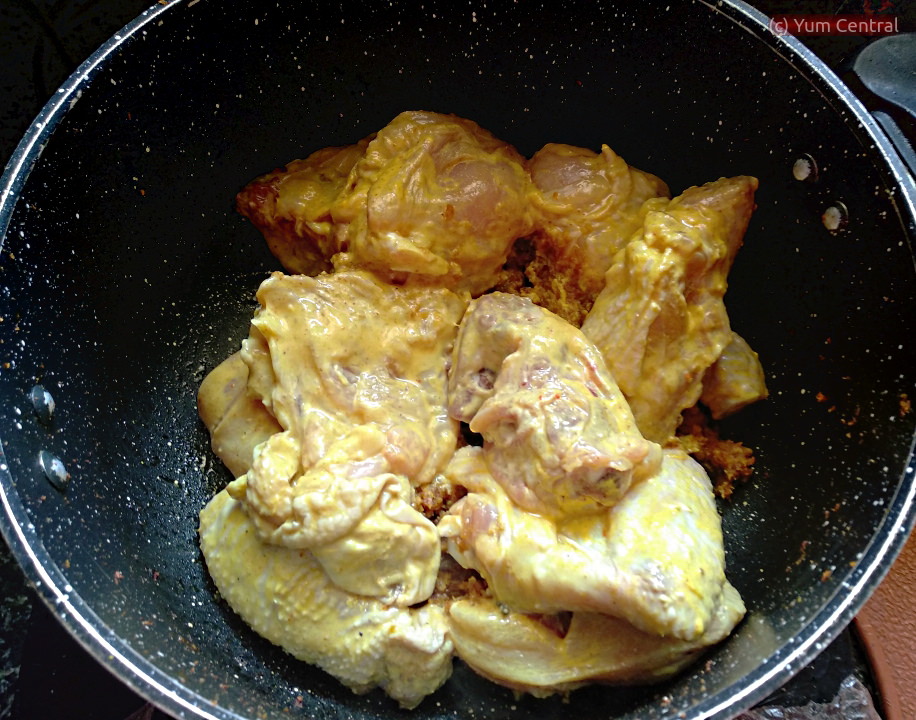 Meanwhile, if you still have some of that mixed marinade left, add it to the masala.

As the chicken starts to secrete its juices, mix the pieces well with the base, so that the masala gets into the crevices of the chicken and adds to the flavour. Let more vigorous stirring ensue. 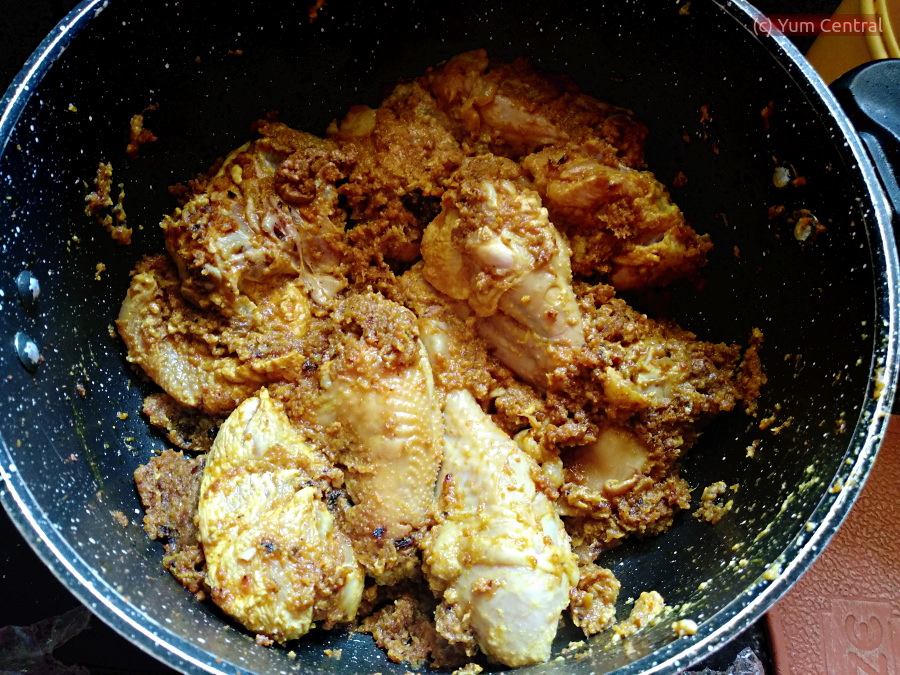 Once the chicken is covered with the masala and acquired most of its colour, add the cream and once again, stir away!

The cream will tone down the kick of the spices, while its water component will mix with the smooth masala, which will now start to secrete some really flavourful and fragrant oil. 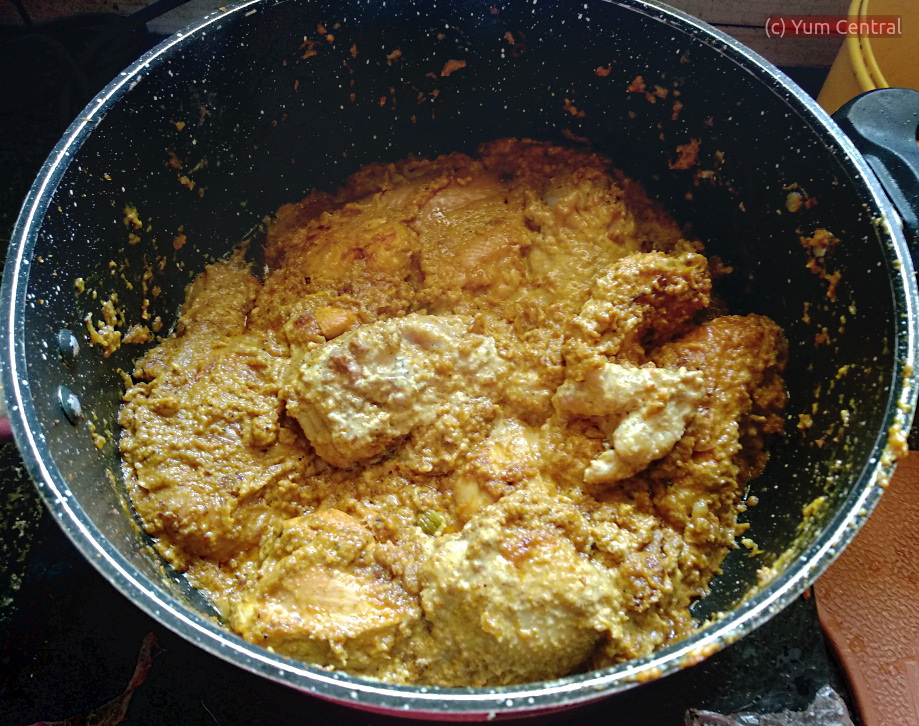 Now, add some water for the gravy – depending on the thickness of the gravy you want – and turn up the heat a little. Stir so that everything is mixed well. 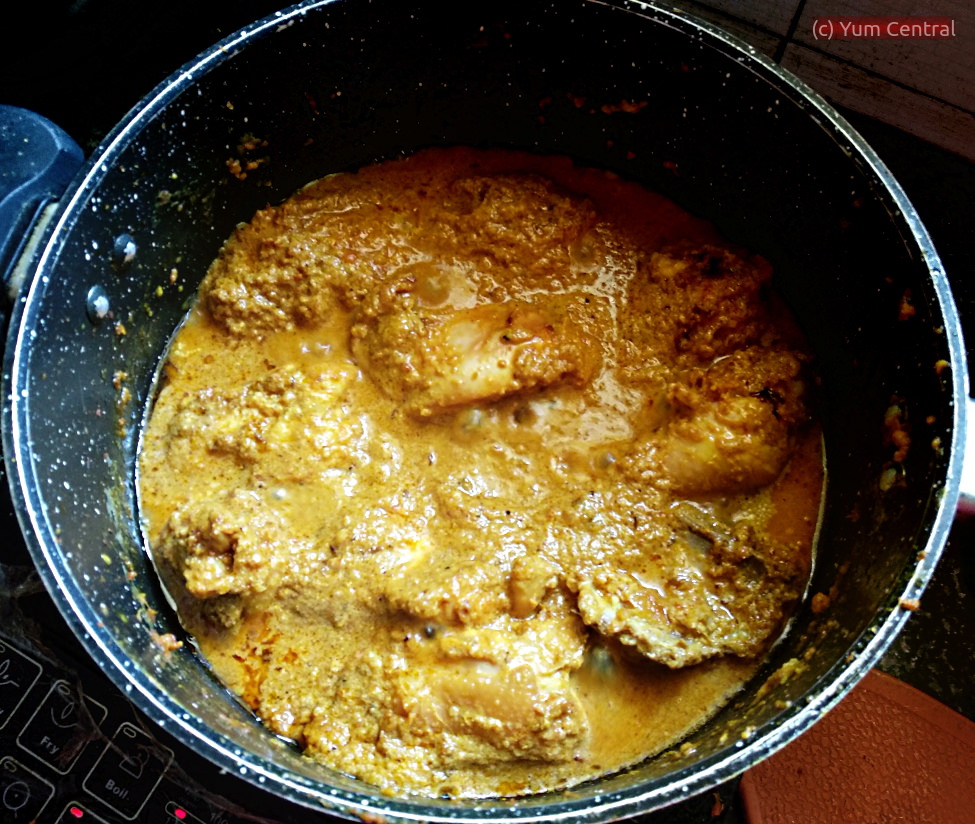 Cover your utensil, and let all the flavours be sealed in. Keep checking so that nothing sticks to the bottom. Stop cooking when the gravy has reduced to your liking. Garnish with freshly-chopped coriander leaves.

And finally, plate and serve!

Remember the fenugreek leaves and cashews? Here’s how you can use them.

Fenugreek leaves: Add them to a little hot water, so their flavour starts to come out. Add them to the Chicken Korma gravy when it is still a little runny, and enjoy a whole new flavour profile!

Cashew and almonds: Either crush them into small pieces and add towards the end of the recipe, like when the gravy has almost done reducing. Or, make a paste and add to the gravy at the same time for a smoother taste!

Cook some rice and have a dry-ish accompaniment with the Chicken Korma, or use some Indian flat-bread – roti, fulka, parotta/paratha, naan, kulcha or what-have-you.

While you are at it, why not even try some pita bread or something similar, and tell us what you think of the results?

Also, got any tips, tricks, changes to the recipe or feedback for us? Write to us in the comments, or reach us directly! We promise to reply as soon as possible!