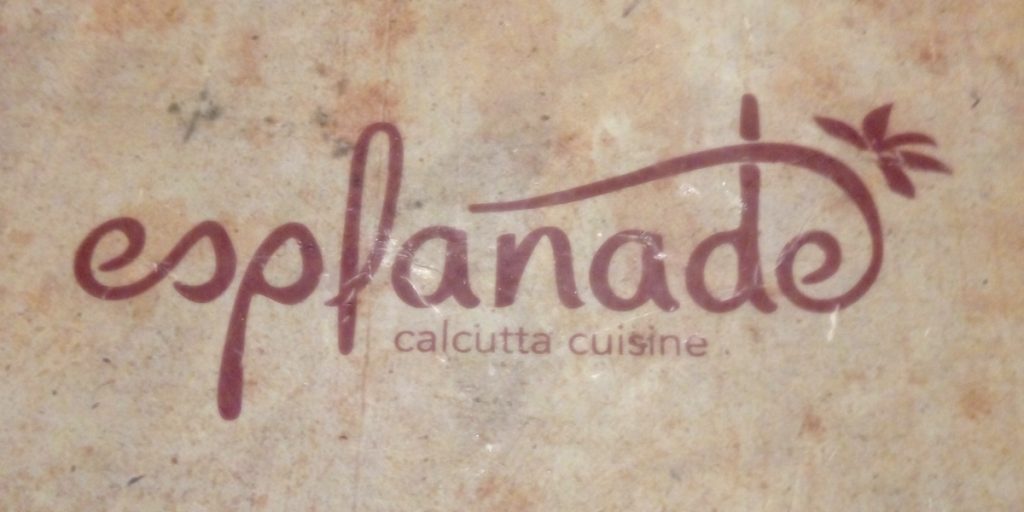 So ‘twas the day of St Valentine – Valentine’s Day, for those who needed that explanation – and Arkadev and Pooja decided to find a little slice of Bengal inside Namma Bengaluru to celebrate the occasion. The location they found was Esplanade in Indiranagar, and the experience they had can be summed up with one word: Nostalgia. If you want further directions, this is the place:

Now, the place itself has a cosy feel to it. The lights are not all that bright, and there are small candles on individual tables. They made for a romantic setting, but had a practical use too, as we learnt when the power supply was disrupted a couple of times for a few seconds. So Pooja ended up ordering the Aampora shorbot (left) – a Bengaali rendition of what northern India would recognise as Aam Panna – and Arkadev got the fresh lime soda. They turned out to be quite refreshing. They were the optimum temperature – not so cold as to numb the palate, but neither too warm to ruin the experience. And alongside we had the Chicken Kobiraji.

Fun fact: While the word Kobiraji may be an adjective alluding to the local doctor who practises traditional medicine, and is called the Kobiraj, this dish has nothing to do with such a person. The name Kobiraji is derived as a breaking-down of the word “coverage,” which refers to the light and flaky crust of fried beaten egg that covers the original thing. And it was flavourful and delicious! We talked to Firdous Alam – the gentleman running the eatery – after our meal, and he confirmed that we had, without even consulting anyone, ordered a house speciality. He said he would have recommended the Daab Chingre (a special prawn curry made with tender coconut, and often served in the shell of one), Bhapa Ilish (hilsa fish steamed with a specific concoction of spices), Bhetki Paturi (Bhekti fish steamed and cooked in a banana leaf with spices) or the Kachalanka Mangsho (a dish where mutton and green chilli are the eponymous ingredients).

However, it was the fifth dish he named that Pooja had alredy ordered – with an ear-to-ear grin that would later turn into a smile of satisfaction. It was the Kosha Mangsho (Mutton with specially spiced curry) and Luchi (puffed bread). We were not exactly in a mood for rice, so two Lachchha Parathas (Bengal’s equivalent of the Kerala parotta) and a Koraishutir Kochuri (Luchi-like bread stuffed with grounded, spiced and then cooked peas). We knew we had ordered the correct thing with the first lick of the gravy, which we found just a smidge scanty. What it lacked in quantity, it made up for in taste: The flavours played around in our mouths for quite some time! And it paired well with the Lachchha Paratha as well! Pardon our hungry selves, for we found little time to snag a pic of the Koraishutir Kochuri. But you can take our word for it: It was soft and flavourful as long as it stayed warm. And that goes for the Kosha Mangsho as well! The mutton was succulent at first, but quickly turned tough. However, it did not turn rubbery. Thanks, Esplanade!

There was a limited spread for dessert, but we chose the Baked Bonde (sweet Boondi in kheer), which was a delight because it was served warm and stayed warm. Not exactly an Esplanade speciality, but wonderfully sweet! It was only after we had finished our food-coma-inducing meal that we managed to notice that Esplanade had come up with some Valentine’s Day specials. We had ordered the Chicken Kobiraji/Kabiraji from here, but would have liked to sample more of the cuisine. Maybe another time. When we are really hungry and have more money in out pockets. Because as much as the restaurant would like to say, eating there is not exactly a cheap affair.