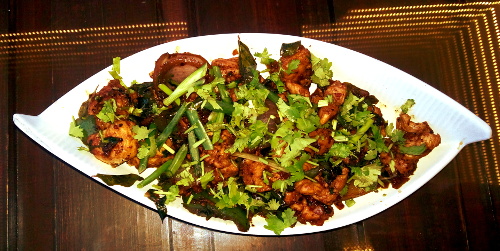 It’s been a long time since Yum Central put up a post, and those of you good folks who follow us may have been disappointed for quite some time. But we are making an effort to get back on track, starting with this food review, and we definitely will.

First, a little bit about what we have been up to. Pooja and Dodo have turned a house into a home, while Arkadev has moved on from Deccan Herald to the India edition of International Business Times. The times are hectic, but we soldier on, cheered by one another, and often by Dodo’s playful antics. Like chasing after, playing with and chewing up insects that dare to cross his path.

Want more glimpses of what he does? Visit him HERE!

So what changed after several months of silence to bring us back to the blog? For starters, it was the time. For seconds, it was a long time coming, because both of us — Pooja and Arkadev — had been planning posts, but never getting around to writing them. Something or the other came in the way.

That was why we finally sat down and decided, this food review was what we would re-start writing with. Now, Pooja was unavailable for this one, so it was Arkadev all the way at Attic on Lavelle Road, which you can see here: So this was the place on the second floor where we sat. This looks a bit drab here, but once the lighting came on, the ambiance was quite nice. Not too conducive for quite conversations, though, because the music was loud. The Food Bloggers Association of Bangalore (FBAB) team sat at one of the corners, reserved for us for the food review. It was the 37th meet-up of the group, and the first time I was attending one.

The menu was diverse in taste, but somewhat constricted in ingredients. Nevertheless, chicken! We weren’t complaining. Here’s the full menu:

There were a few other things as well, like this pitcher of beer that was refilled for us. It complemented the pasta really well, but we will come to that later. Just the presentation of the beer was a lovely sight! See for yourself: That’s Rohini, one of the earliest arrivals at this sundowner. At the peak, there were close to a dozen FBAB members at the venue, having a taste here, taking a sip there, and overall enjoying a gala time, which began as soon as the starters came out. The first of them was what I best understood was pepper chicken: The taste was up to the mark, but nothing beyond that. The chicken felt a little dry, but the spices managed to make up for that somewhat. The food review, once it commenced, never let up in excitement.

Next up was some other chicken pieces, what I understood were chicken wings. Now, you can rarely go wrong with these: And they didn’t disappoint. Just right amount of spice made it a great accompaniment to the cold, crisp, bitter lager beer on an evening that was turning out to be better and better with every dish.

Then came the chicken strips starter. I was busy talking to the folks I was meeting for the first time, so by the time I came around to it, some of it had been already polished off. Hence, this looks a bit sparse:

The veggies in this one were crunchy, which was a good foil for the softer chicken. However, the spicing seemed to be uneven, because there was one very hot bit that immediately made my right eye tear up. Thankfully, it also managed to clear my nose.

Along with these came the Greek Salad: Fresh greens, crunchy veggies and the cold texture complemented the other spicy foods really well. I would have had more of this had not some of the elements of this dish seemed a little too soggy for them to be palate-pleasing.

Then came the thin-crust pizza, and was lapped up in a manner of minutes. The others got the photos, but I guess I was too busy biting into this succulence for the food review to snap a pic. Like many other things, you can rarely go wrong with a pizza, and this was no exception.

Soon, it was the turn of the tangy Tetrazini pasta. Like they say in Hindi, pehle darshandhaari, fir gunvichaari. Rough translation: First judge by presentation, then quality. Behold: This looks appetising, but looks can be deceiving. The tangy sauce is missing the burst of flavour, instead having a rather smooth taste, which somehow mutes the tang. Even the pasta seems a bit overcooked, having long lost its firmness. It was tearing along the lines on its sides, and wasn’t too easy to either serve or eat with a single fork.

And last in the food review came the sizzler. Now something about sizzlers has me nostalgic. Probably my dad introducing me to the dish as something Pran was eating in “Amar Akbar Anthony” in THIS scene. Now, I couldn’t make out whether that was a sizzler, but this definitely was. However, I think I forgot to click that one as well!

Nevertheless, it was juicy, succulent, and flavourful, although not in a very strong or overpowering manner.

Overall, it was definitely an entertaining experience, with the credit going equally to the company and the food.