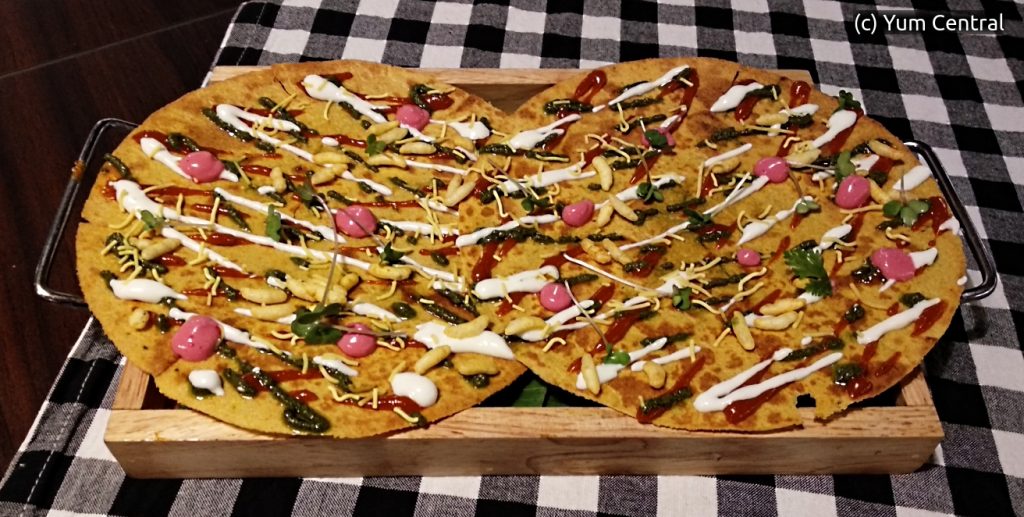 Give me food and I will eat all day. But as a non-vegetarian, I do like myself some skewered, roasted, curried or other kinds of meat when I am eating out. Housefull in Sheshadripuram, Bengaluru, made me rethink that choice for the entire duration I was sampling its fare.

Just three of us were invited at a short notice, and had a great foodie experience – both in terms of eating and service.

The pricing was described to us as “aggressive,” but in our minds the quality of food – although the spread was entirely vegetarian – was quite up to the mark.

Of the three drinks we were served, I picked up the Aam Panna – the traditional Indian drink served through the ages after being made from mangos that are on the raw side. However, the chef here had managed to add a little extra seasoning to his interpretation, and I dare say, it tasted delicious! 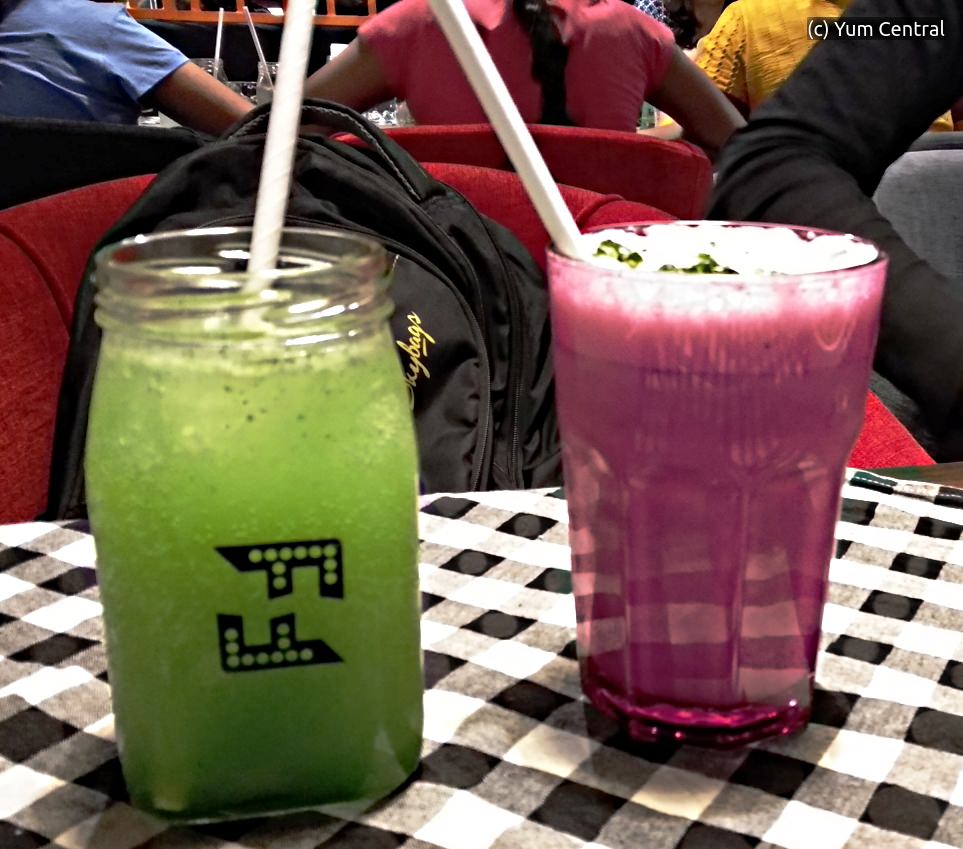 Novelties at eateries are – ironically – nothing new. Thus, street-food staples like golgappa – or pani puri, pani patashe, fuchka, gup chup, etc, across India – have been on restaurant menus for quite some time.

Housefull has its own Golgappa Shots. While the fillings are the same, the water you consume them with is different – one sweet, another sour, and the third is masala chhaas. 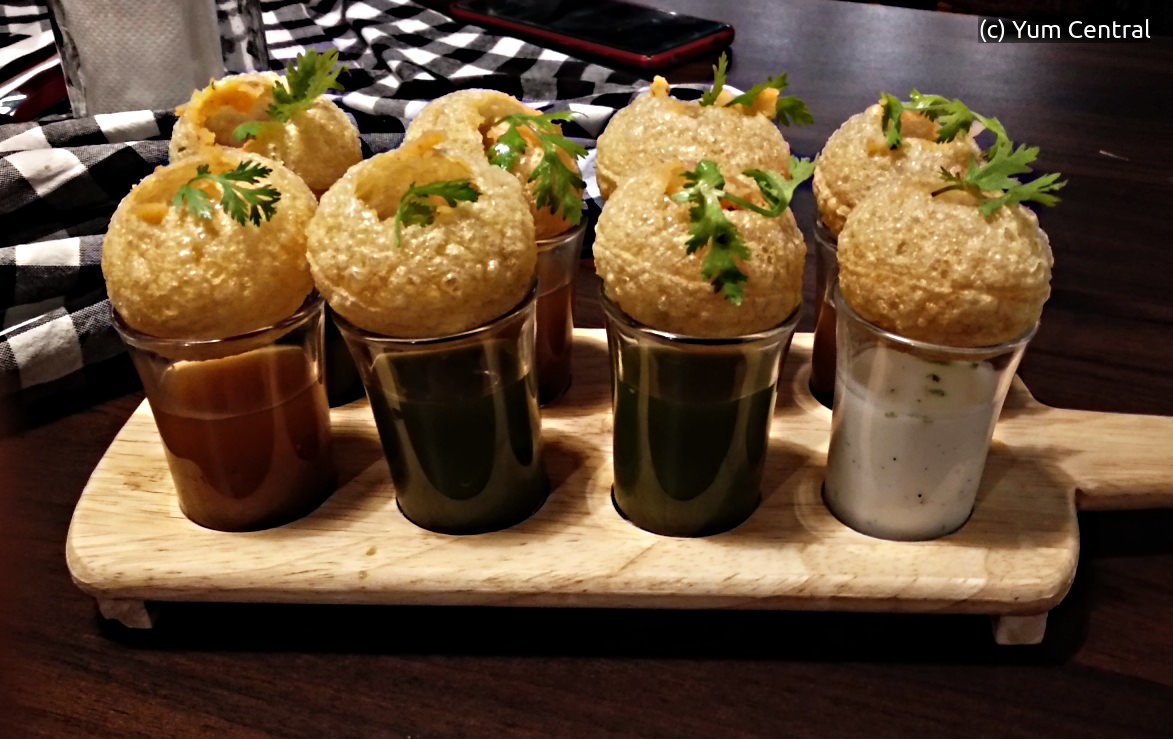 First up was some Masala Khakhra, treated with some wonderful sauces and the pungent flavour of Rasam powder. The sharpness of the spices on this khakhra – traditionally a Gujarati snack – was offset nicely by the creamy, sour sauces spread evenly over the surface. 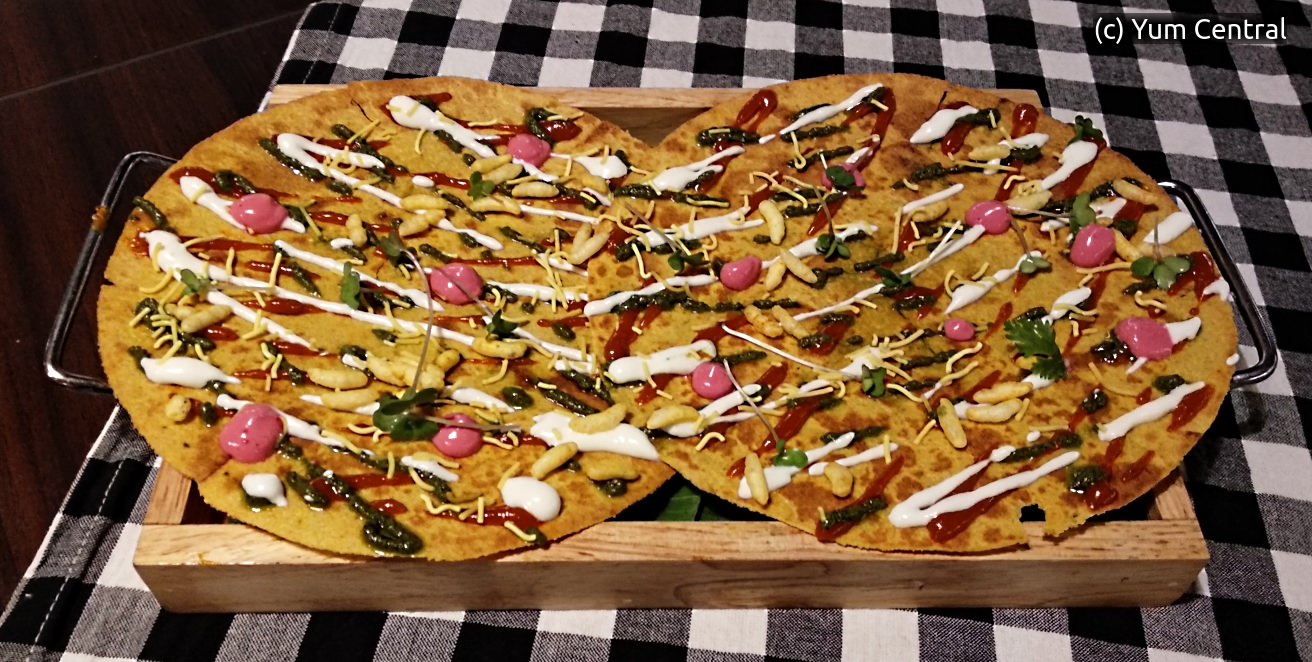 We were also given some Cheesling Bhel to sample. Yes, these are the same Monaco Cheeslings that we had with tea on lazy afternoons. Except, the chef at Housefull has some special tricks and flavours up his sleeve.

Each mouthful of this dish is a crunchy, creamy delight that will have you craving for more! Get a couple of plates of this ordered home and pair it with some good beer. You won’t be disappointed! 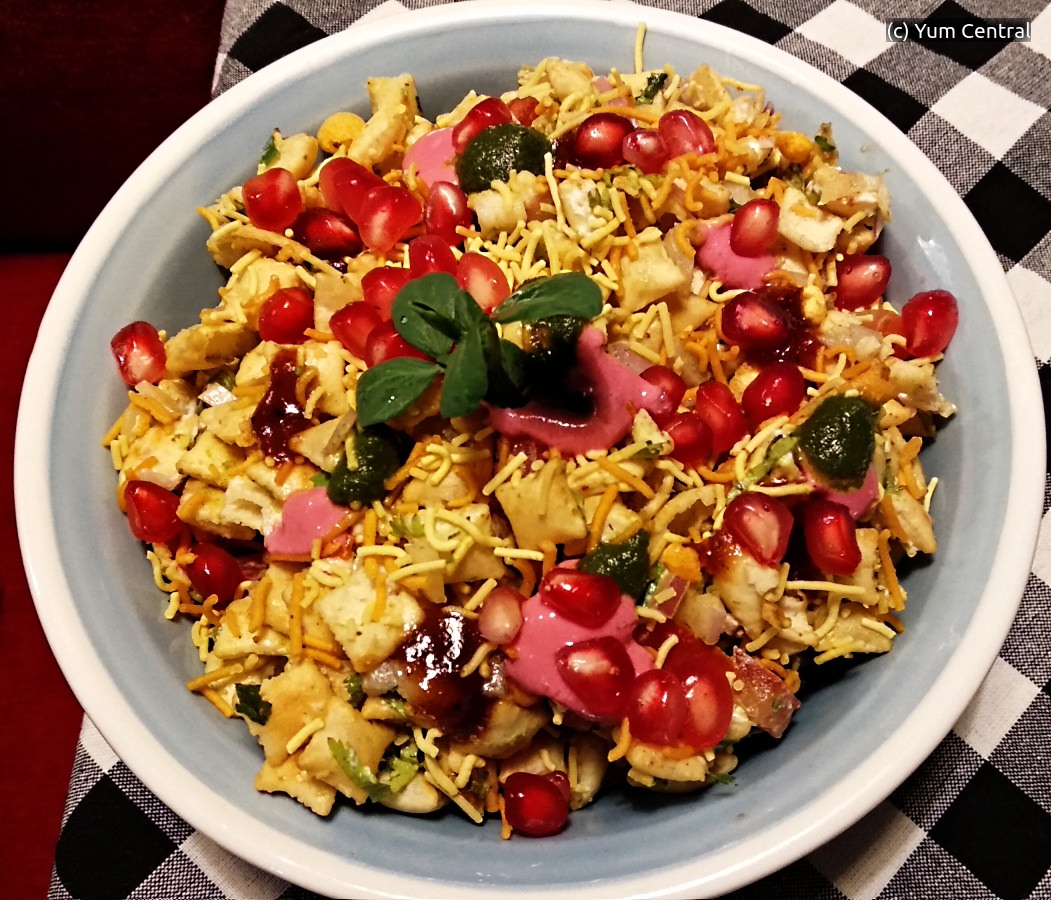 Even the Pav Bhaji has a twist here. Small pieces of butter-soaked bread are served on some smooth-yet-savoury bhaji. Skewer the bread with your fork and use it to scoop up the bhaji, which has been topped with a dollop of butter. Grab some seasoned raw onions as well. As hearty as it gets! 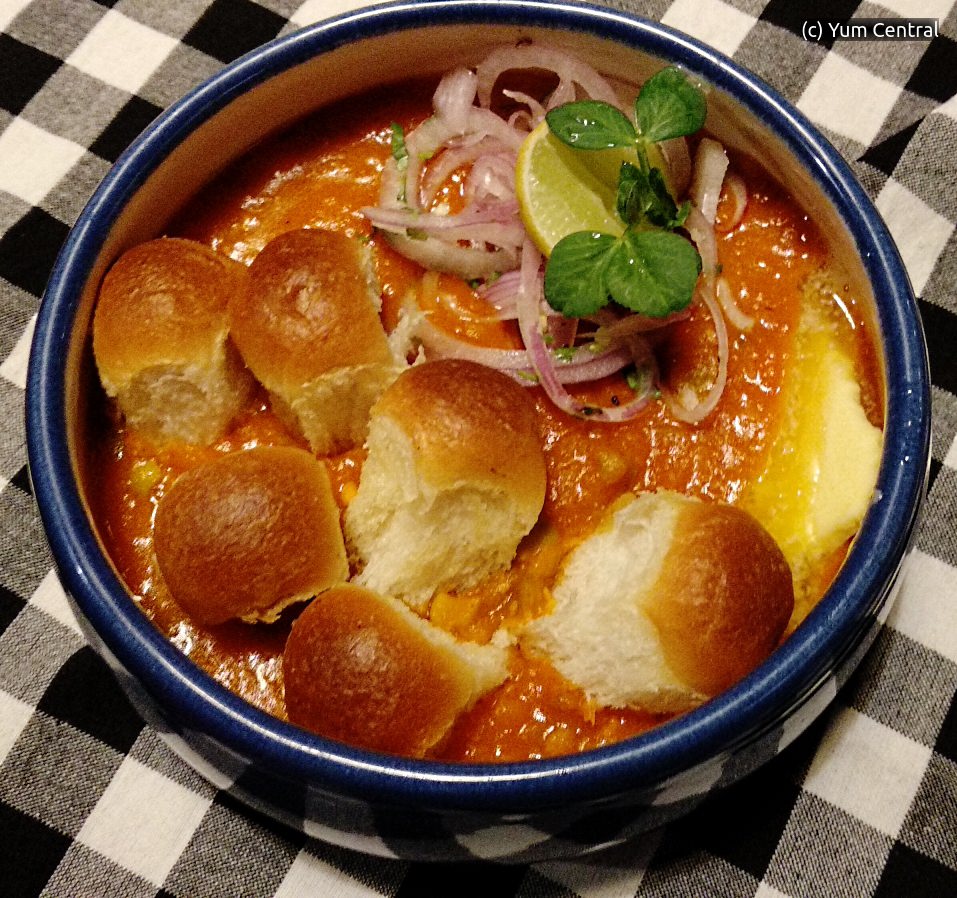 Next up, we had some Makhna Nut Masala. Again, a heavy dish, but the flavour profile was wonderful! When you combine tangy, crispy fox-nuts with cashews, almonds, sev and a secret concoction of sauces in just the right way, it could very well be your signature dish! 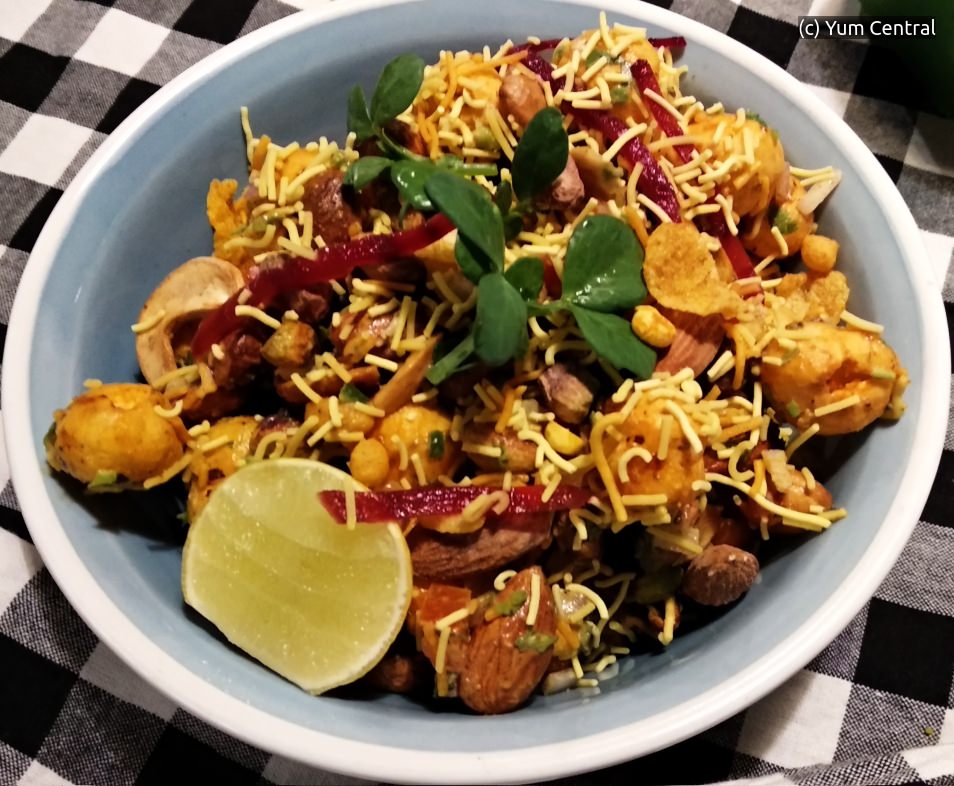 Now, one item of vegetarian food that is extremely healthy but detested by children across the world with almost equal hate is broccoli. Housefull seems to have a trick up its sleeve here as well, serving it Tandoor-roasted and with mustard.

The Tandoori Mustard Broccoli is indeed an interesting dish, and may get at least some to take a nibble. However, a little more flavour infused into the actual broccoli heads would go a long way in making these more palatable. 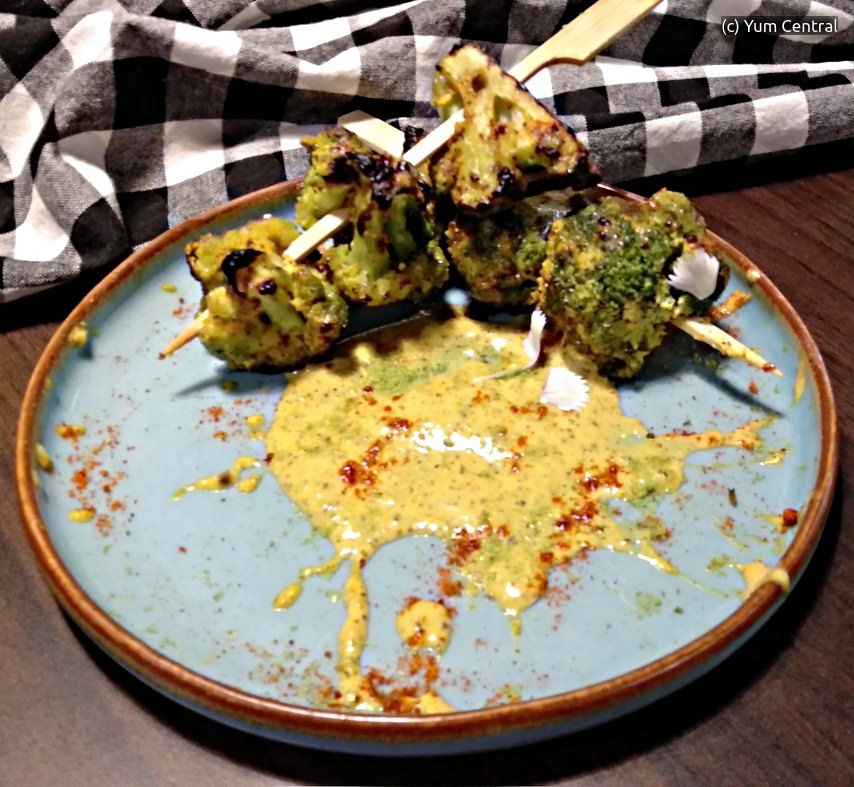 Next up, some Gujarati Koki. Topped with some special sauce and served with some chilli sauce and curd. Again, a real tastebud-tingler. 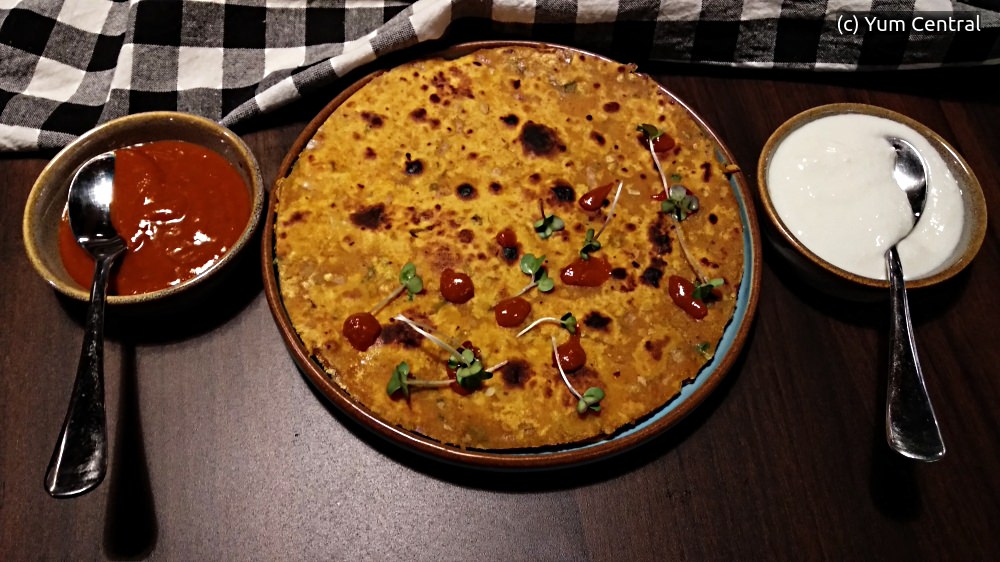 Housefull’s menu may primarily North Indian, but there are some fusion surprises as well! One such dish is the Spicy Sriracha Paneer – a possible interpretation of the traditional Chilli Paneer. This was a little underwhelming, but still a good eat if you like paneer. 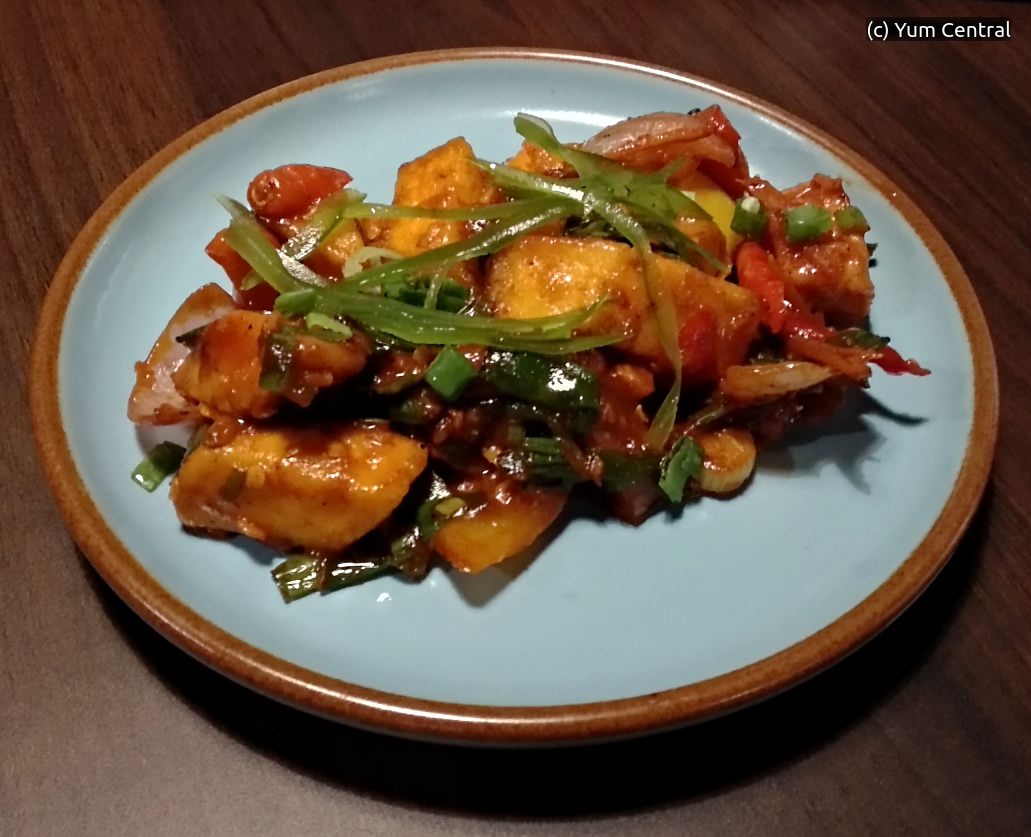 Now, I understand that at least one of the dishes here isn’t exactly main-course material. However, its Housefull version is worthy of the “main course” tag.

This is the Chholey Bhaturey. The Bhaturey here may seem a little too little when faced with the quantity of the Chholey. If that is the case, call for some of the other kinds of bread around polish of the deliciously succulent, soft, sweet-and-tangy Chholey. They are a revelation! 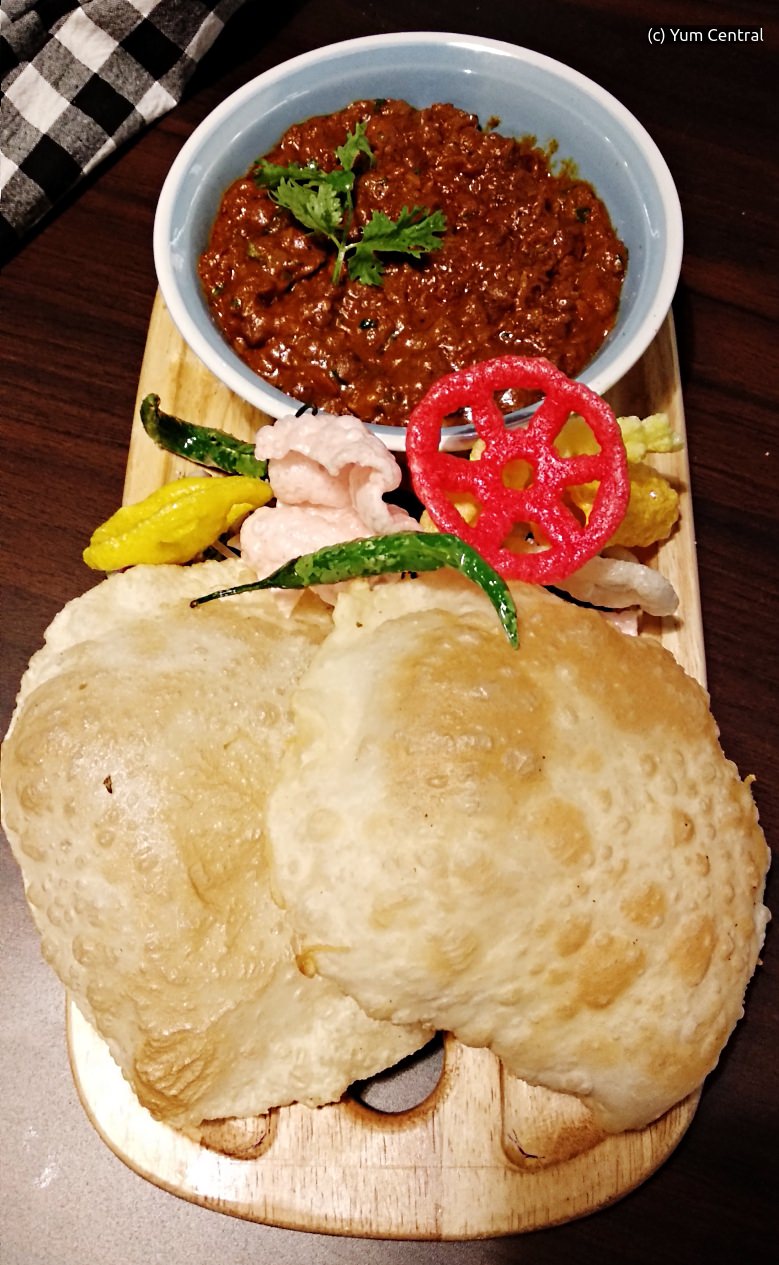 If you still have some stomach space left, try to smooth Daal Makhni and the delicious Paneer Makhni – each in a league of their own. 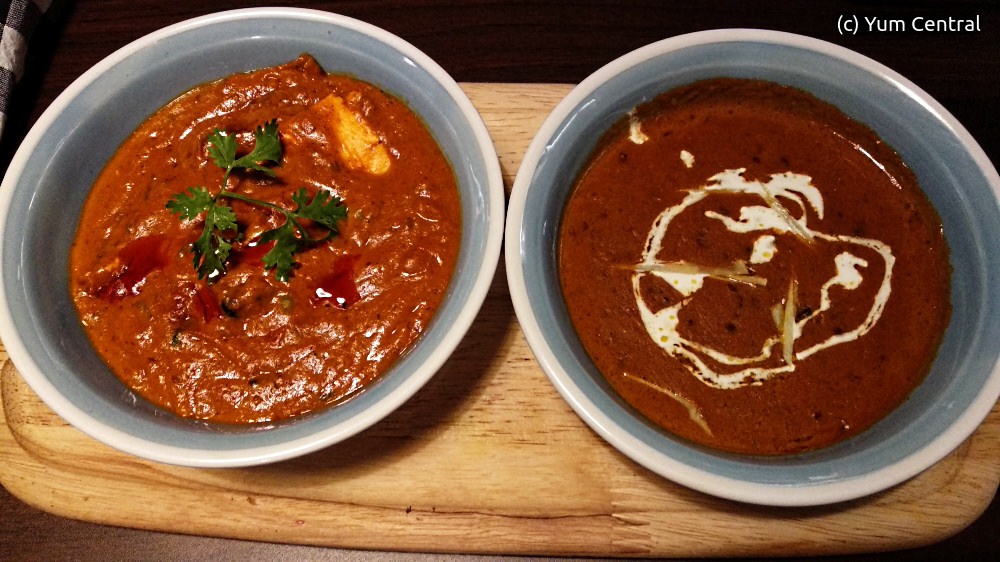 Pair these with some smooth-but-spicy Chilli Cheese Naan, some crunchy Red Onion Naan or the sweet Taaftaan. 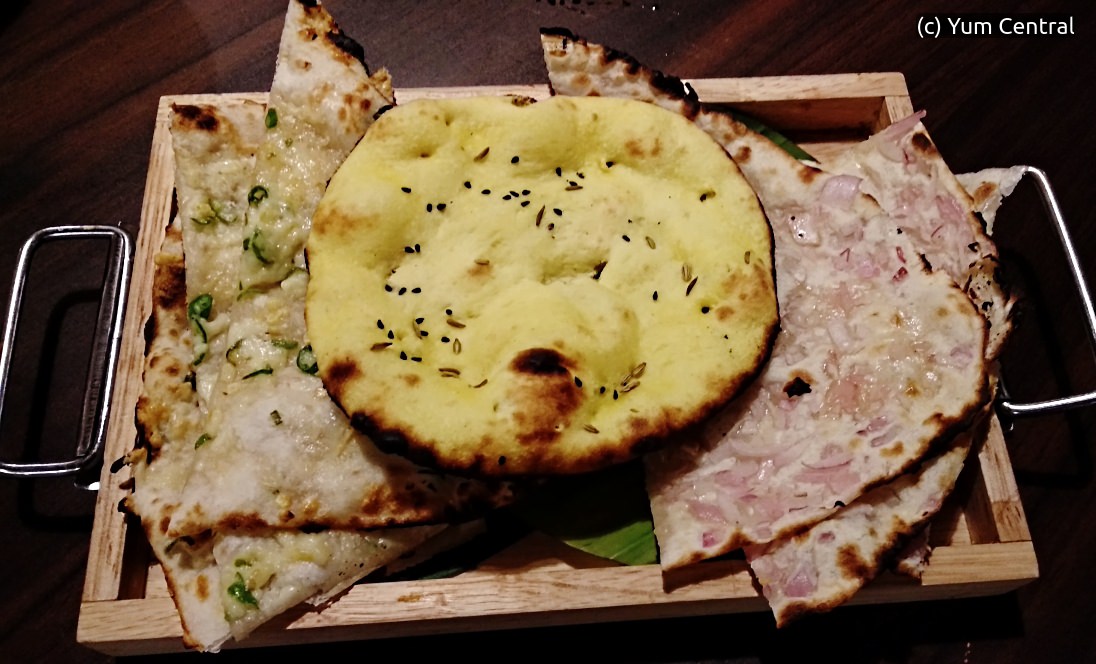 Try some Paalak Pulao if you like, or if you don’t want the breads. 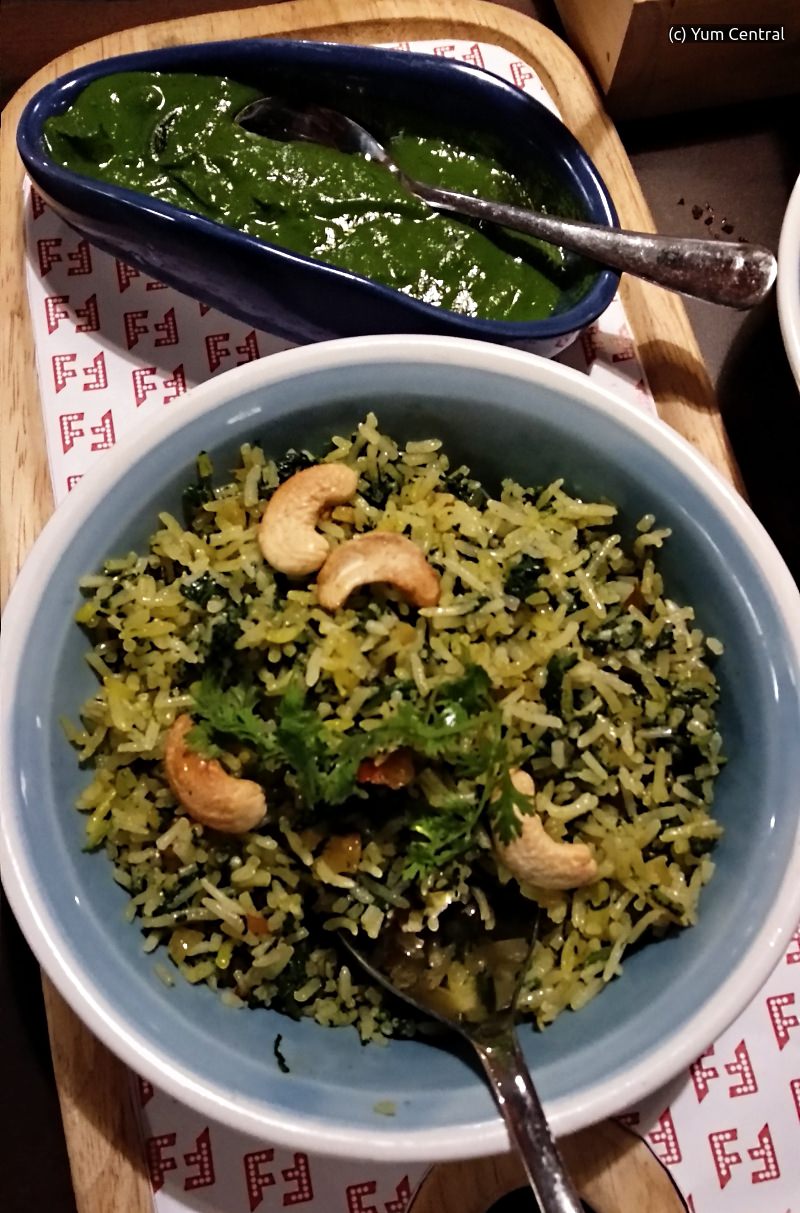 And if you still want some Chinese, Housefull offers some Hakka Noodles. 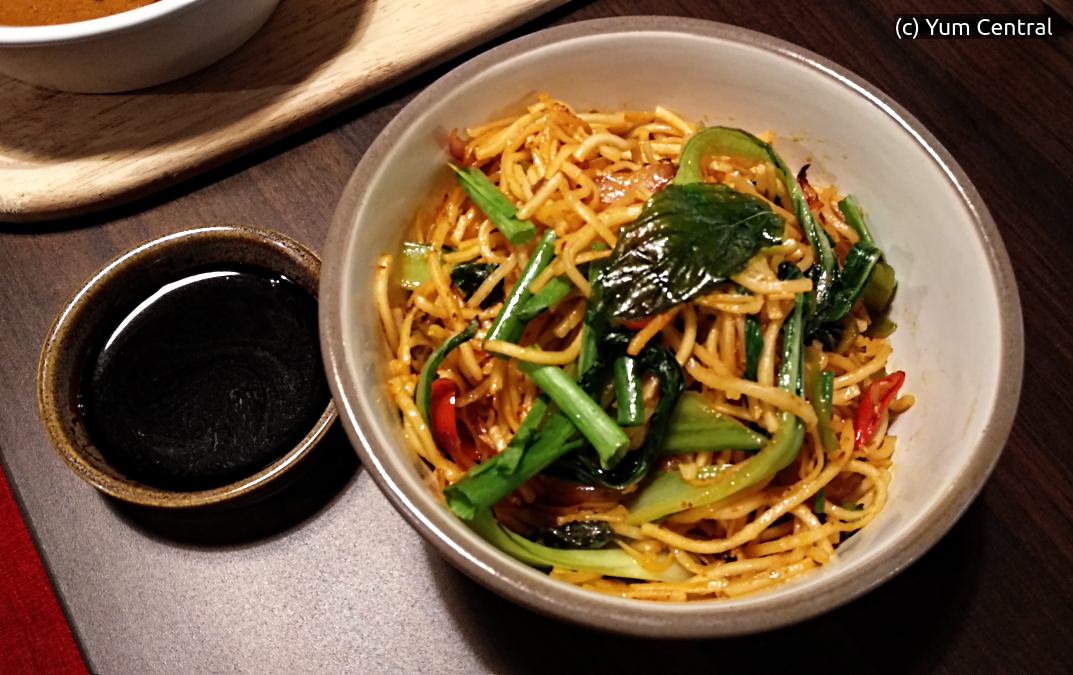 You have an interesting selection of desserts at Housefull. For example, the Gulab Jamun Mousse. This is two gol gappas filled with chocolate on solid cubes with sections of gulab jamun at the bottom. 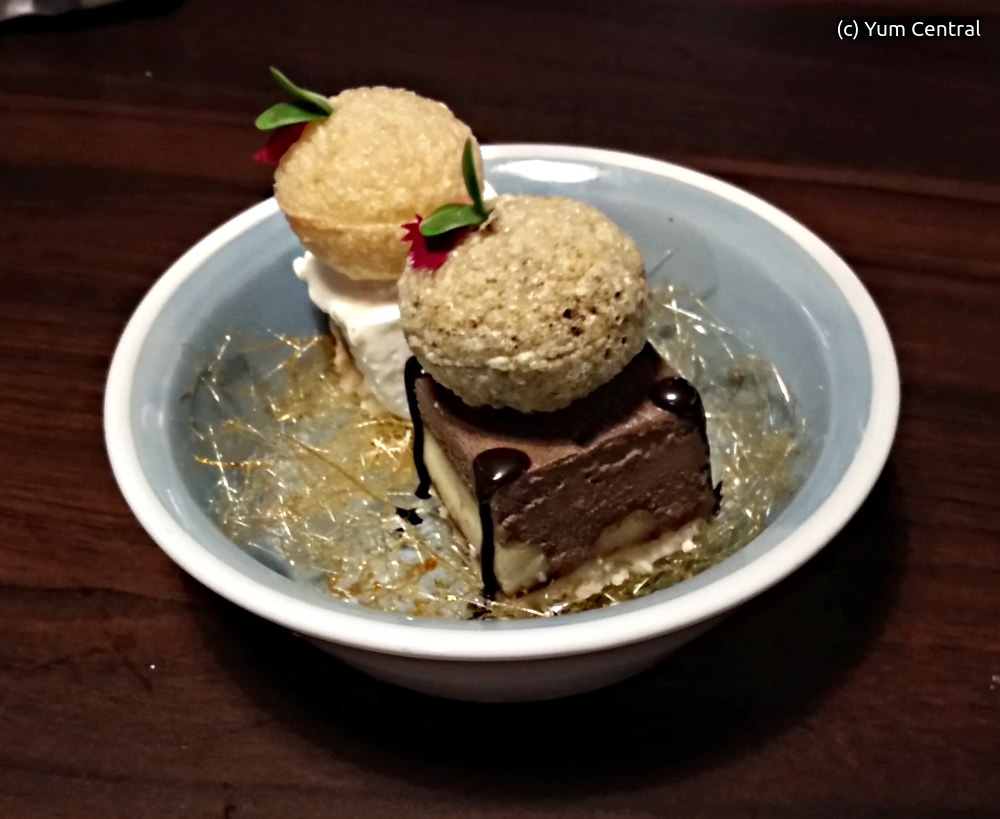 Next up, some Bournvita Pista Kulfi. In short, pista kulfi covered in actual Bournvita powder! Now, I was not exactly crazy about these, but give it a try if you loved eating Bournvita powder on its own.

And finally, some Guava Chilli Ice Cream. Remember eating guava that was on the cusp of ripening with some salt paired with red chilli powder as seasoning? This tastes exactly like that, except in ice-cream form, and no pesky seeds. 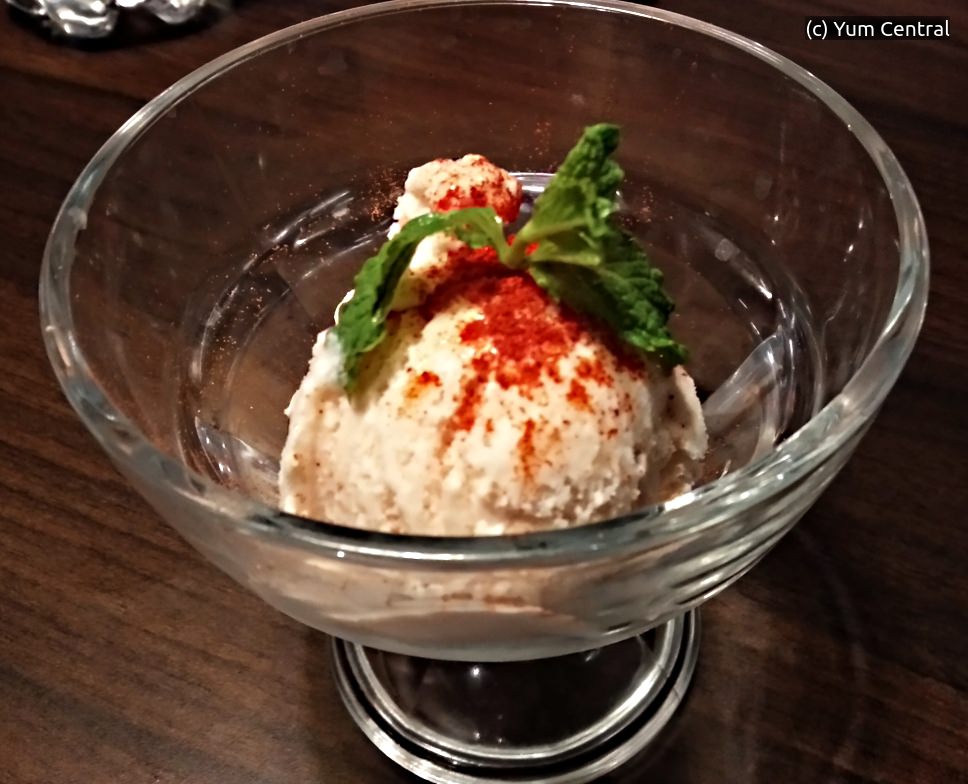 Here’s an eatery that serves primarily vegetarian food, but the quality will make you want to keep going back. 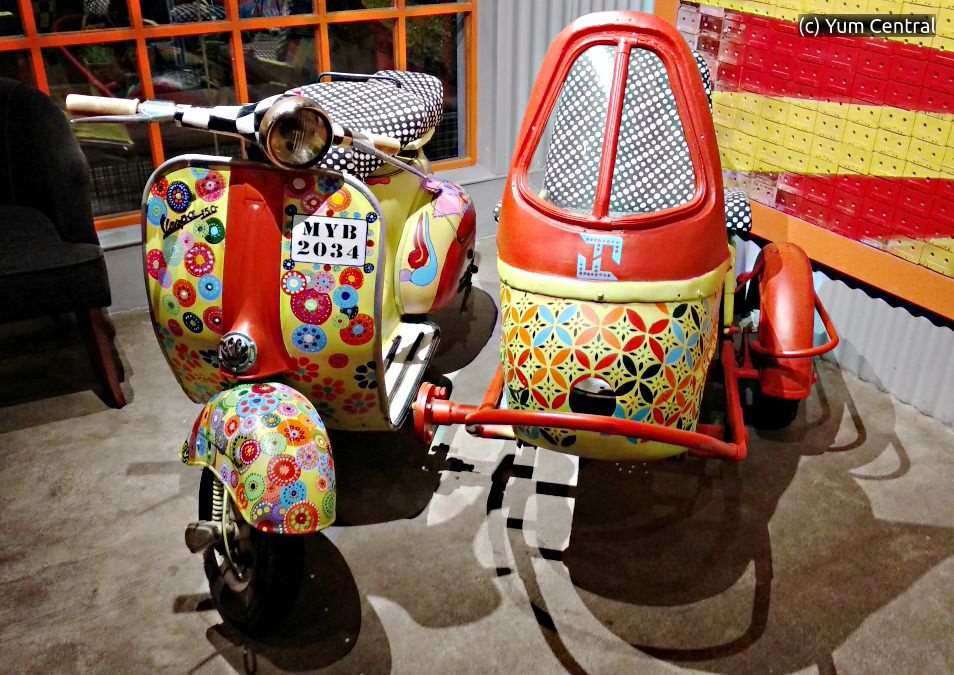 Sure, the price is slightly on the steeper side, but the quantity served can easily keep the bill on the lower side! 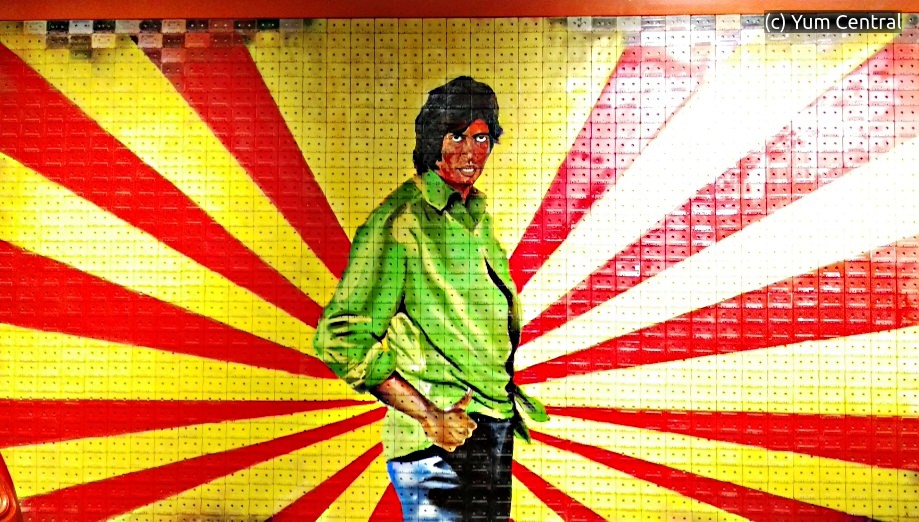 And even the service is great. Here’s to you, Laltu – our server for the night.