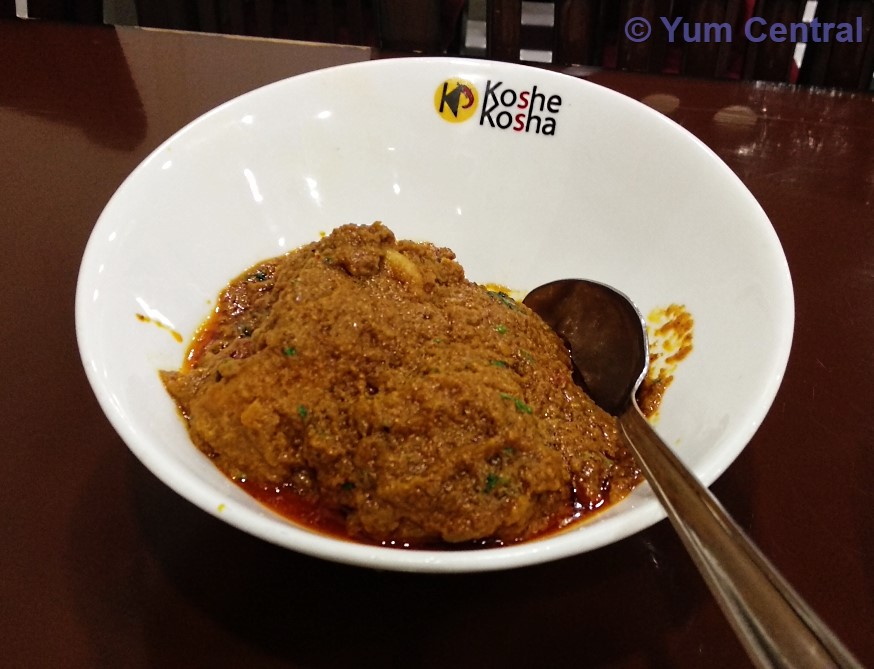 As a Bengali who has been out of West Bengal – soon to be Bangla – for close to two decades, I have always hankered for home-cooked food. A part of that hankering got satiated on a chance visit I made to one of the two outlets of Koshe Kosha – an eatery chain that specialises Bengali cuisine and derives its name from an especially flavourful rendition of a mutton curry: the Kosha Mangsho.

Koshe Kosha has an ambience that is an amalgam of old-world Bengali charm and modern amenities. While the décor has touches of modernity, the table and chairs invoke nostalgia with their design.

And then there’s a wall-mounted rack full of Bengali books. We Bengalis are often derided as bookworms. This was one occasion I would gladly endure such derision.

I was feeling especially nostalgic on this day. Perhaps this, combined with a lightness of the pocket, prompted me to order some Aloo-r Dom – Dum Alu for those from up north – and Luchi – Poori for those living above the Vindhyas – to snack on.

However, little was I to know that Koshe Kosha manages to draw you in with something more: After I had placed the order, I saw a plate of crispy fired snacks – some would refer to them by the generic name fryums – placed on my table. And it was complimentary!

But like any good foodie – a near-synonym for a good Bengali – I refrained from downing the whole plate, and instead nibbled on the crispy, light snacks until the Aloo-r Dom arrived.

The gravy looked thick and brown, with the pungent aroma of the spices engulfing me in an embrace that transported me back home, where I had not been for close to two years now.

And then came the Luchi. Honestly, they were a disappointment to the sight, because they looked like deflated versions of what I had been traditionally served at home.

Thankfully, I managed to look past this and got down to some eating. And each bite proved to be a fresh trip down memory lane. I had intended this meal to be a snack, but by the end of it my stomach was full and my heart was content – and half the Aloo-r Dom was still in the plate!

I managed to get that packed and took it home, enjoying it on another occasion.

Koshe Kosha is a restaurant you order from every day and still have a heavy wallet. It will leave you with too much month at the end of your salary if you do.

Koshe Kosha is best enjoyed with the entire family, where each bite invokes a fresh old memory, a fresh round of reminiscence and a fresh wave of warmth through the entire body, like the proximity of a loved one.