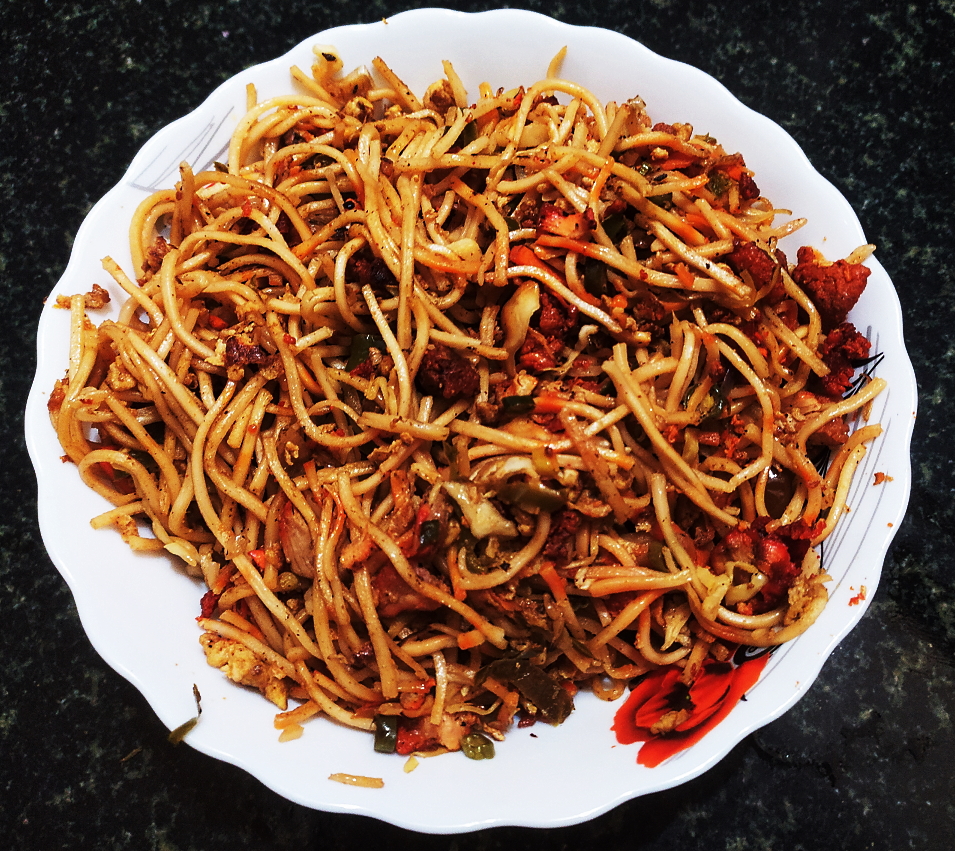 This is hopefully the first of several blog posts I will put out as I self-isolate. So, here goes!

I was on the first few days of self-isolation, after my workplace told me to stay at home and possibly work from here, when I ordered in from La Zizone Restaurant and Café.

There was a good 50% discount, which led me to get four items for just around Rs 300. That’s four dinners sorted at less than Rs 100 a night! Fair warning: My food was strictly non-vegetarian, and that will play a key role in this review.

Now, I have stated before that rolls and pizzas fall into the main-course category for me. However, I will make an exception here.

One of the first things I ate was a Chicken Roll. Now, most places would make this with a paratha that encases some succulent dry curried chicken pieces along with some veggies. La Zizone managed to change it up a bit.

Thus, what I got inside was more of a Chinese mishmash, with wok-tossed veggies and small chicken pieces blanketed in a dark-soy-sauce coating. The outside was a very thin flatbread, akin to Rumaali Roti.

I did enjoy this, not gonna lie. It was an especially good accompaniment for the couple of drinks I downed. The only problem here was finely sliced chilli that packed enough heat to mask the other flavours, and there were entirely too many of them, in my opinion.

I heated this up a bit, and it was as good as when it was delivered. The only problem is, it was not as good as I had expected it to be. The chicken was dry and stringy, and the flavour of the biryani seemed like a letdown.

Surprisingly, the raita was still as refreshing even when warm. And the accompanying gravy was also a palate-pleaser, with robust spices.

The next day, I tried the Chicken Noodles. These, too, needed to be heated, with a sprinkling of water. The end-result was an eminently palatable bowl of noodles with chicken so succulent and such nicely spiced that I was drooling for every morsel!

There were a couple of small problems, though. The first was, as with the Chicken Roll, too many chopped chillies for my comfort. The second was that although the chicken appeared boneless, as it was intended to be, I came across small shards of bone. Now, chicken bones are generally not a problem. However, they are a bother if they are small enough to lacerate your inner cheek or throat tissue when chewed or swallowed. Hope La Zizone takes care of this.

The last was the Chicken Fried Rice. As with the Chicken Noodle, this one needed some water-sprinkled heating as well before it was ready for consumption. And, again, the chicken pieces were just wow!

However, the problems of the chopped chillies and bone shards continued to bug me.

The restaurant name may come across as Western, but a closer look tells us its regional roots. It appears to be a play on the words “Lazeez” and “Zone.”

Little doubts over the Lazeez part, actually. The food, barring the Bengaluru Chicken Biryani, is delicious and fresh. Heck, even the biryani accompaniments are fresh! Also, there is little to complain about the portion sizes, especially for the price at which I got the dishes.

However, as I have already mentioned, the restaurant uses what in my opinion is too much chopped chilli. While this may be in an attempt to make the food spicier and more flavourful, the heat from the chillies defeats both purposes by making the food unnecessarily hot.

Then there are the bone shards. I really don’t want cuts in my mouth or my tongue. And that’s all I have to say for now about La Zizone.