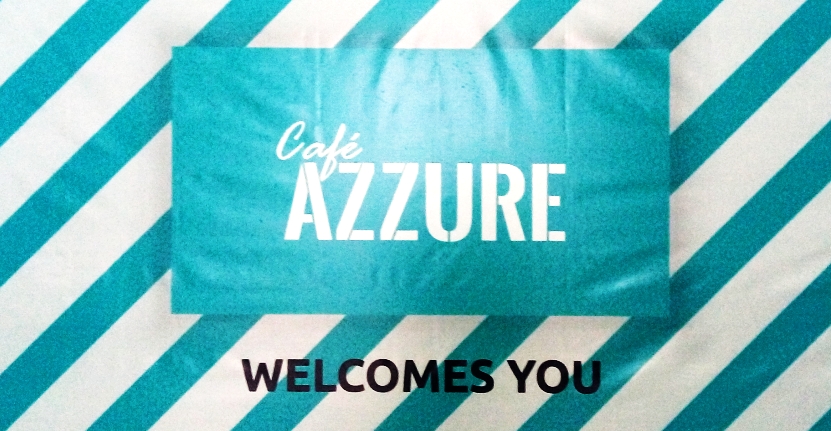 Mahatma Gandhi Road, better known as MG Road, has been one of the best-known thoroughfares of Bengaluru, right from the days it was Bangalore. And one of its best-known intersections if the one where Brigade Road meets it. Having an eatery a few floors above the ground at one of the busiest intersections of one of India’s most happening metropolitan cities may not sound like a good idea, but Cafe Azzure manages to overcome that hurdle.

The official location is just 10 or so buildings away from the MG Road Metro Station, and on the fourth floor above Pantaloons. Pretty difficult to miss. And once you arrive, make sure to go out to sit. That is the best place if you are there for a sundowner. Look down, and you have a cool view of all the hustle-bustle that you have just left behind. The five of us reviewing the place were given a multitude of drinks to help use wash down the food. The place serves no alcohol, but the drinks themselves are cool and refreshing for the most part. Here they are: If you are looking for a sugar rush or a chocolate hit, go for the shakes. If you want to chill some more, try the Blue Heaven. Even the Granitas are nice and smooth, with the crushed ice slowly melting into water helping the drink stay nice and cool.

We were first offered the Schezwan Chicken Nachos, and these alone were the kind of starters that had us drooling! I personally felt this was one of the better nacho dishes I had eaten in recent times: The nachos were crisp, the cheese was creamy and well spread, the chicken bits were well seasoned, and so was the salsa dip the dish was served with. Great start! Next up were two more non-vegetarian starters: Butter Garlic Prawns and Sesame Chicken Strips. Neatly presented, the prawns were well-seasoned and a delight to the tastebuds. The chicken strips had become slightly soggy, but that could have been because we took a little time to get to them.

This was followed by two more starters – vegetarian this time. These were Salt and Pepper Mushroom and Cheese-loaded Jalapeno Balls, the second being served with cocktail sauce. The mushrooms were again beyond reproach, while the Jalapeno Balls – I felt – required a different kind of creamier cheese that would make it even more delightful! Of course, the main course too came via recommendations, and started with a creamy white pasta which the following photograph does not do justice to. This was the kind of pasta that would best go in advertisements where some girl sensuously licks it off her lips! Pizza was always on the cards, but we had no idea it would look like this! The entire thing is like a ring – a giant hole in the middle where the sauce is kept, surrounded by the actual pizza. And the circumference of this ring is alternately filled with cheese and other fillings, making it a treat for both the eyes and the tongue. See for yourself at the Azzure Special Twisted Chicken Pizza! And the final offering – which we were told was a house specialty – was Cheese Crumb Chicken. A delight to look and, and an equally delightful eat! Special mention again for the cheese, which was awesome. All that cheese already had us full, but like they say, there’s always room for dessert! This time round it was a Mascarpone Brownie [cheese again!] and Sinful Chocolate with Ice Cream. The latter seemed slightly sugary, but maybe that was how it was meant to be, but the Brownie was a delight! This is probably one of the better non-alcoholic places in the city for a sundowner. Unwind with your friends – and the odd board game supplied by the good people at Cafe Azzure – and there are chances you will feel rejuvenated for another tough week ahead!

So how come this is not getting a 4-4.5 out of 5 in the ratings? I’ll be honest. Cafe Azzure is indeed a strong contender for a 4, but what brings it slightly down is the service: When a bunch of people have ordered food and are starting to eat, there should be more cutlery around. And then there’s the cost, which is a little steep for regular visits.

Then again, as an eatery that had only opened in mid-November last year, Cafe Azzure is receptive to feedback. And here’s hoping they keep that up. If it does, there’s no keeping it down!