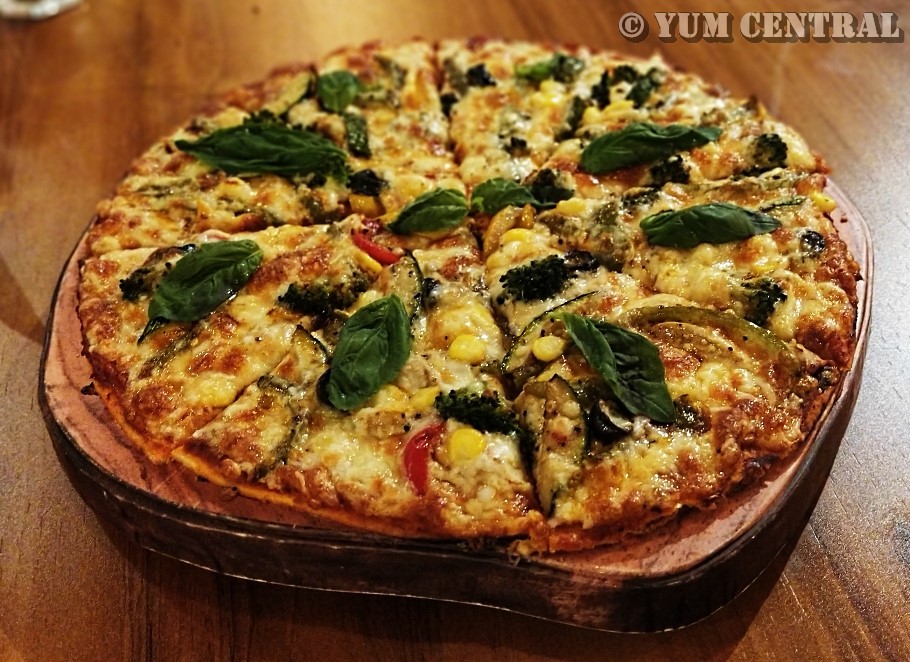 However, just because something is an exception does not mean it is exceptional. That is the case with the food at Café Rustico, as we will see when we scroll down. I can’t say anything about the hookah, though, because I don’t smoke.

The café, with a nice ambience, offers a nice variety of mocktails and hot drinks. Nothing alcoholic, though.

We were offered the Rustico Special Mocktail, a cold and sweet concoction garnished with fresh fruit. It was a good thirst-quencher, but nothing to write home about.

We had limited options for starters, and so chose to go with the in-house recommendations. First up were some Corn Coins. Crunchy on the outside, creamy and cheesy on the inside, these had the potential to be paired well with the stiffest of drinks!

Next, some Cracking Corn. These turned out to be really crispy and crunchy, with the seasoning and flavouring on point! Once again, it was a pity that we had nothing hard to pair it with.

Third on the table was Pav Bhaji Fondue. The fusion was a really interesting concept, but the bare bread fluffs and the somewhat subtle — bordering on bland but not exactly so — pav bhaji could have been reimagined much more creatively.

The final starter we had was Stuffed Cheese Fritters. If you are a cheese-lover, this one is for you. Pair this with a good wine, and you are halfway to heaven.

As we moved on to the main course, the first dish on the table was a creamy, hot plate of Penne Pasta Alfredo. The cheese was once again on the overloaded side, but we were not complaining. The penne pasta was cooked to a softness that made biting into it a pleasure. What was even more pleasurable was teasing out the creamy cheese that had made its abode in the recesses of these pasta cylinders!

Second up was a Primavera Pizza. Topped with English vegetables and boasting some pink sauce over a thin crust, this one came with a set of expectations that it failed to fulfil.

Final on the table was some Vegetarian Lasagna. Drizzled with pink sauce and filled with fresh vegetables that had been sautéed to a soft crunch, this one was filling. It was, in fact, one of the better dishes of the evening.

I often say the best way to test an eatery is to taste the most common dishes. That was the logic when we ordered some Hot Fudge Brownie with Vanilla Ice Cream. It came with the chocolate sauce a bit on the burnt side, emitting some really acrid odours. However, that did not stop us from digging in. It was not a huge hit, but it was no flop either!

However, for it to really make a mark, Café Rustico must either up its food game or make sure the smoking experience it offers is the absolute best! Here’s hoping they can do either one of the two.