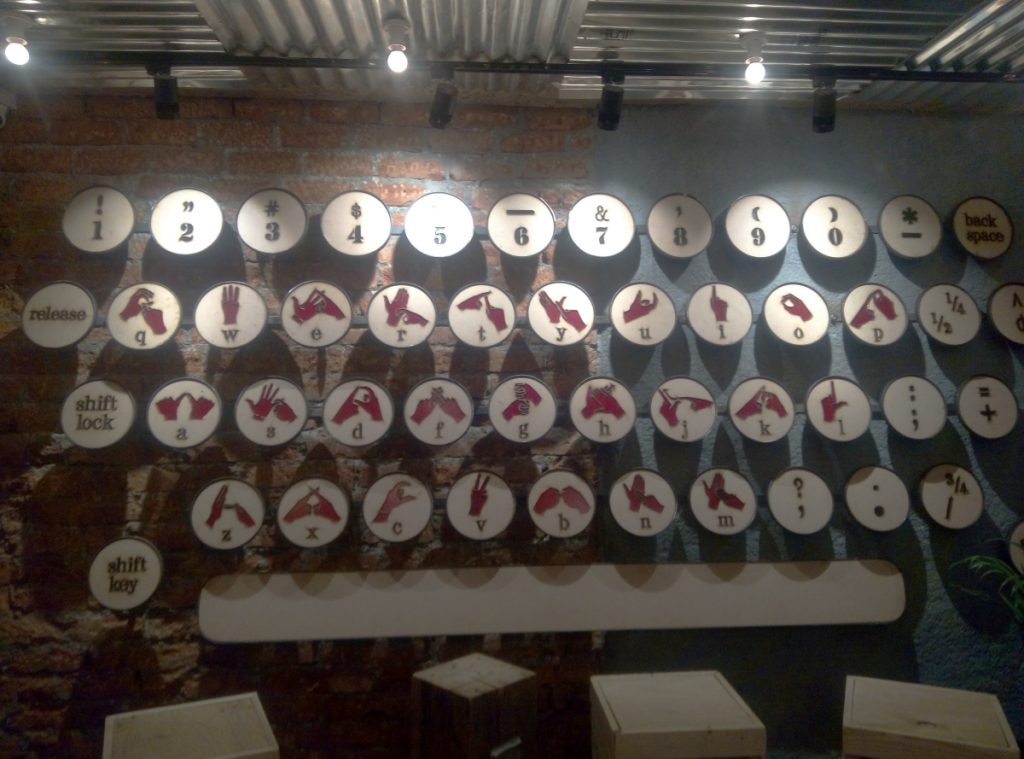 The oft-cliched understanding in the restaurant business is that food quality and service speak much louder than a blitzkrieg of advertisements. But there’s a reason it has become cliched: It was widely true once, and still holds true – albeit in much fewer cases. Echoes Koramangala is one such place.

We – some like-minded friends – visited the place, and were nearly floored by it! Why? Like I said, the food and service spoke volumes, despite our servers being all hearing and speech-impaired. Of course the cooking-staff speaks, but come on! This was a dose of empowerment we all found wonderful!

So how does it all work? See these three photos, and the explanation comes after that.

As soon as you sit down, you find the eight cards – seen in the top left image – on the table. These, along with the pen and paper the wait staff bring you, are to be used to order and give feedback. But how do you call them in the first place? See the switch on the right? Press it, and a light corresponding to your table switches on, as seen in the bottom left image. Neat, huh?

So we sat down and placed our order. The first to come out were several mocktails – Echoes Koramangala does not serve alcohol. These are various kind of chocolate shakes, simple sparkling drinks and and a Red Velvet. They are real lifesavers in the summer Bengaluru is currently sweltering in, and really once the food starts coming, you really understand the importance of these beverages!

The next to come out is fast turning into a staple in many eateries for any meal as a starter. Honestly, nothing beats cheese-covered nachos with a salsa sauce dip when it comes to good finger food when all you want to do is some chin-wagging of both varieties!

Then, the full-meal starters: Clockwise from top left, a form of mushroom tikka, chicken and fish Chinese style, and some chicken kabab.

Next up, something recommendation-worthy! On the right might have been some more kababs, but on the left are the showstealers. Those are chicken and veg momos, and they deserve a special mention because rarely does an eatery season the covering of momos. Echoes did, and my tastebuds are still craving them even as I write this!

Some more starters, all equally nice – both veg and non-veg are great!

The thing with these gatherings is, we often fill up a little too much on the delicious starters. But that did not deter some of us – me included – from partaking in the main course. Here you see, clockwise from left, the Hyderabadi Dum Biryani, the Classic Butter Chicken Thali and the Veg Tiffin Service. Props are due here for the Butter Chicken Thali, where the gravy is tasty enough to polish of several rotis at a single sitting!

And then the two pastas. Well done, beautifully seasoned, and a simple delight when you want to sit back and yak away, with the conversation interspersed with small bites.

My friends stayed back for some dessert, but I had to get out of there to reach home on time. Had office early next morning.

But like I have said before, the service speaks volumes, and the ambiance at Echoes Koramangala is one of the friendliest I have seen in eateries around Bengaluru. Visit this one for the food as much as for the experience! I even wrote an article about it!