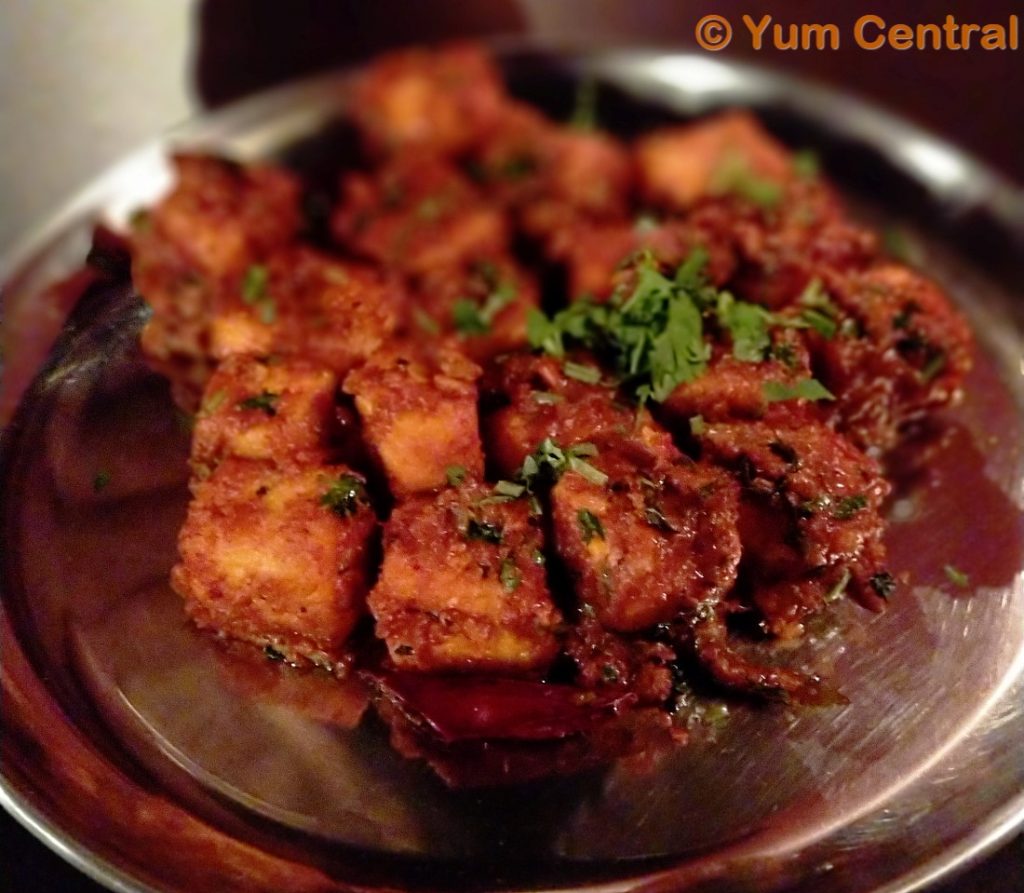 Some restaurants have the reputation of their food quality varying wildly from one outlet to another. Others will insist on all the ingredients, condiments and sometimes even semi-cooked food coming from the same place so the taste is uniform. Chulha Chauki Da Dhaba (CCDD) — as far as I know — does neither of these, and yet manages to maintain a degree of authenticity across all its outlets.

I had the pleasure of eating at its Kalyan Nagar outlet, and the experience — food-wise — was not much different at the newly-opened outlet on Sarjapur Road. The hearty spices and the dhaba-like environment had been replicated well!

As I have already mentioned, CCDD outlets are bedecked to resemble a dhaba. The Sarjapur location was no different: Charpais and wicker seats made for seating arrangement. The only exception was a shed-like construction, which boasted wooden tables and backless benches.

Coloured festoons hung overhead, as they would if there was a tree near a roadside dhaba. And the food was served in stainless-steel utensils, barring the lassi, which was served in kulhads — earthen glasses.

You don’t go to a dhaba and not order lassi. CCDD takes it a small distance further, serving the thick, viscous, sweet curd-based drink in kulhads — earthen glasses.

The Kulhad Lassi had been cooled in the earthen glass itself, and such glasses usually suck moisture from the liquids kept in them. The result is a lassi that was already thick on its own, but with a layer of even creamier version of it clinging to the inner walls of the kulhad, waiting for you to scrape out with a spoon so it can tickle your taste buds.

Punjabi food can be a treat for the tongue in more ways than one. That was one of the reasons we eschewed the meat right at the beginning and decided to start with some Paneer Chatpata. Chunks of Indian cottage cheese tossed in a coating of hearty spices, this one lived up to the “chatpata” reputation, making us smack our lips.

Up next, some Stuffed Mushroom Tikka. A different protein, roasted in a skewer with a splash of mustard — whether in oil form or the ground seeds. The mustard really opened up the sinuses, while the spices did some Bhangra on the tongue, making us turned to the lassi to cool down time and again.

Then, some Sawariya Chicken. Succulent chicken dipped in a green marinade; this one is definitely meant for those who want a break from tongue-coating spiciness.

There’s nothing out of the ordinary in ordering naan at a dhaba or a restaurant that replicates that feel. We stuck to the plot, ordering some Garlic Naan, served buttered up and piping hot.

We paired that with some Malai Kofta — a creamy sauce engulfing two balls of creamy goodness! This one was definitely very subtle, but also a good break from all the sizzling spice food we had been tasting.

But, of course, we had to return to the heat that was building up on our tongues, so in came some Chicken Angaara — soft chicken engulfed in chopped onion that complemented the protein with a sweetness and crunch, all in an oily, hot gravy!

The Sarjapur outlet of CCDD carries on the consistency in quality that is a staple of its other outlets. Drop in for some heart-stoppingly good food!