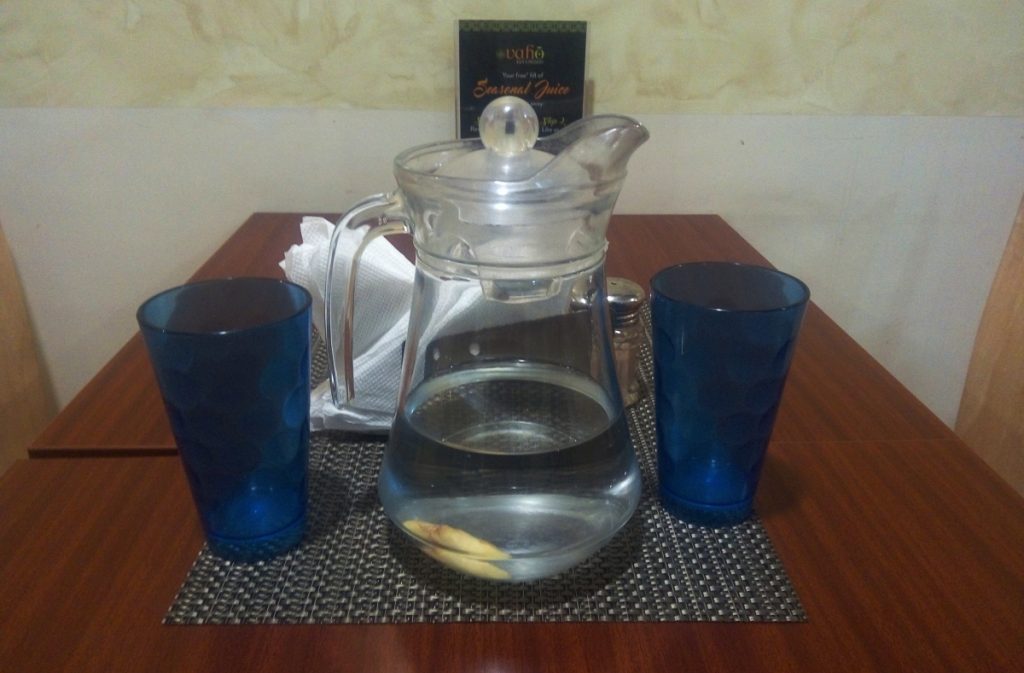 There are two versions of this review. Short version: Visit Vaho Kafe; order their fusion food if you are feeling adventurous, health food if you are feeling bloated or fat, and the weekday or weekend combos if you want to chill and enjoy their food. It’s simple, somewhat reasonable, and you can get takeaways! For the longer version, read on…

Vaho Kafe advertises itself as a “Kafe and Pressery,” meaning you get food as well as cold-pressed fresh drinks there. Owner Umesh Reddy wants to project Vaho as a one-stop destination for healthy and fusion foods, as well as some combos – what came across to me as a mini-version of a thaali – of traditional food. Vaho has also recently added more to its menu, keeping in mind the demands and feedback of corporate clientele.

However, the primary offering of Vaho continues to be health food, as is evident right from the water they serve on the tables! On the day I went to the eatery, the water was infused with ginger, but it varies, from cucumber to cumin to other healthy alternatives.

The food we had as takeaway

In total, four things were ordered: Biryani with Peri Peri Chicken, Chicken Tikka Roll with Cheese, a Glow Onn juice [fresh-pressed and put in a handy, branded bottle] and a Wholesome Mexican Salad.

First, the roll. The idea of making any and all food healthy is extended here as well, with the wrap being made of Atta [wheat flour] and not Maida [refined wheat flour]. And even after about three hours of being made, the roll and its contents did not give way, like any Roti or other flatbread made of Atta does when exposed for a sufficient period to anything that has more moisture.

The chicken seemed a little bland and there seemed to be not much of a presence of cheese anywhere. But the freshness of it all was there in every bite, and I savoured it to the hilt!

However, we had had the Biryani first. Hyderabadi-style Biryani is always a treat, but this time the chicken was prepared peri-peri style. It was lip-burningly good, but the slightly tangy, vinegary aftertaste was a bit of a letdown. That, however, did not stop either me or Pooja from polishing it off to the point where ants would starve. After all, Biryani!

Then there was the salad. Put it in the fridge and had it next morning. Surprisingly fresh and crunchy, and every bit as wholesome as promised! If I was not partial towards Biryani, this would have been the pick of the entire meal! I mean, can anything else beat a salad made of freshly-chopped onions, halved cherry tomatos, chopped capsicum [bell peppers], cucumber, millets and an assortment of fresh ingredients with a dash of lime that you get to squeeze fresh into the prepared meal?

And finally, the juice. Pooja appropriated it from my possession, but was gracious enough to give me a few sips. It tasted like the ingredients we were promised it would have, but was not to my liking.

Some of the things we did not order were the weekday and everyday combos, which we were assured were good and were often ordered for corporate lunches. As for the other foods, even the Biryani was made with less oil than what usually should go in. So if you are a health nut and want some good wholesome food, this is your place.

Umesh Reddy also wants his Vaho Kafe to be a place known for fusion food. To be honest, the fusions may be a bit of an adventure, and may not sit well with palates used to the authentic varieties. But if you crave adventure in what you eat, give this place a try: It will surprise you!