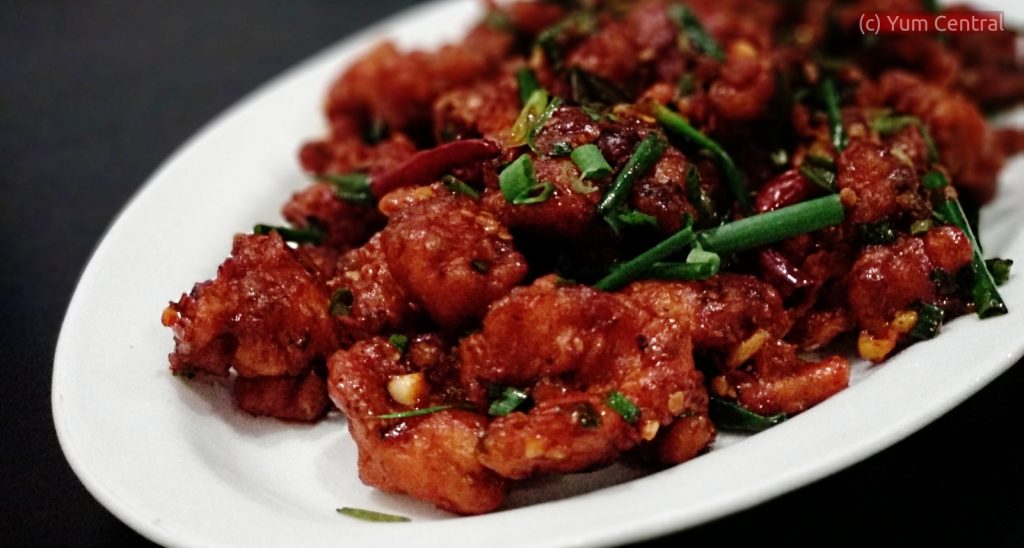 Restaurants attached to hotels are often not the first choice of people who are looking for a quality eatery for the entire family. Rice Bowl is an exception there, serving up a combination of quality and quantity that may make it that occasional celebration destination where the whole family can land up.

One of the first things I was told about Rice Bowl was that it serves food in great quantity, where a single dish can easily be partaken of by two people.

What we had not been told, however, was that there was more to these dishes than just the quantity. Take for example the Lung Fung Salad:

Now this looked very colourful, but the taste seemed to have an even bigger spectrum. The secret? Pineapple! This tasted fresh and crunchy, and was my first experience of eating something with chopsticks!

Next in line was some Chicken Manchow soup. Thick, yet clear, this one was a pleasure on the tongue with its mild and fragrant flavours! 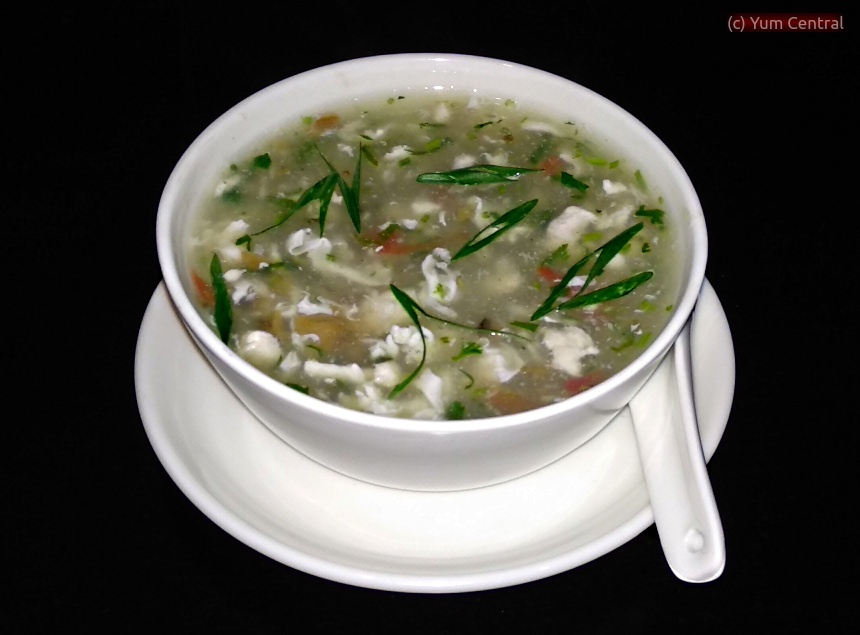 Meanwhile, we had also ordered some drinks. I chose the trusty Tequila Sunrise, which I believed could be paired well with Chinese cuisine. Evenly mixed, it was both a great thirst-quencher and a mellow hard drink that did not exactly numb the taste-buds. 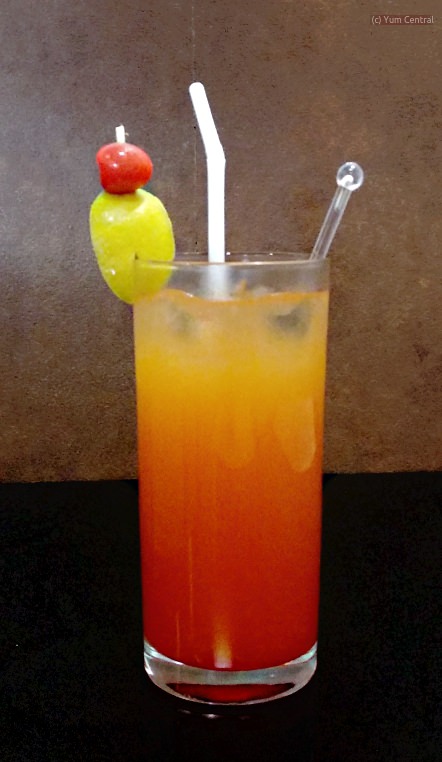 The drinks arrived with the first of the starters. This was the Prawn Pepper And Salt, with prawns that had a crunchy coating seasoned well with salt, pepper and some mystery ingredients that were a pleasure for the palate in more ways than one! 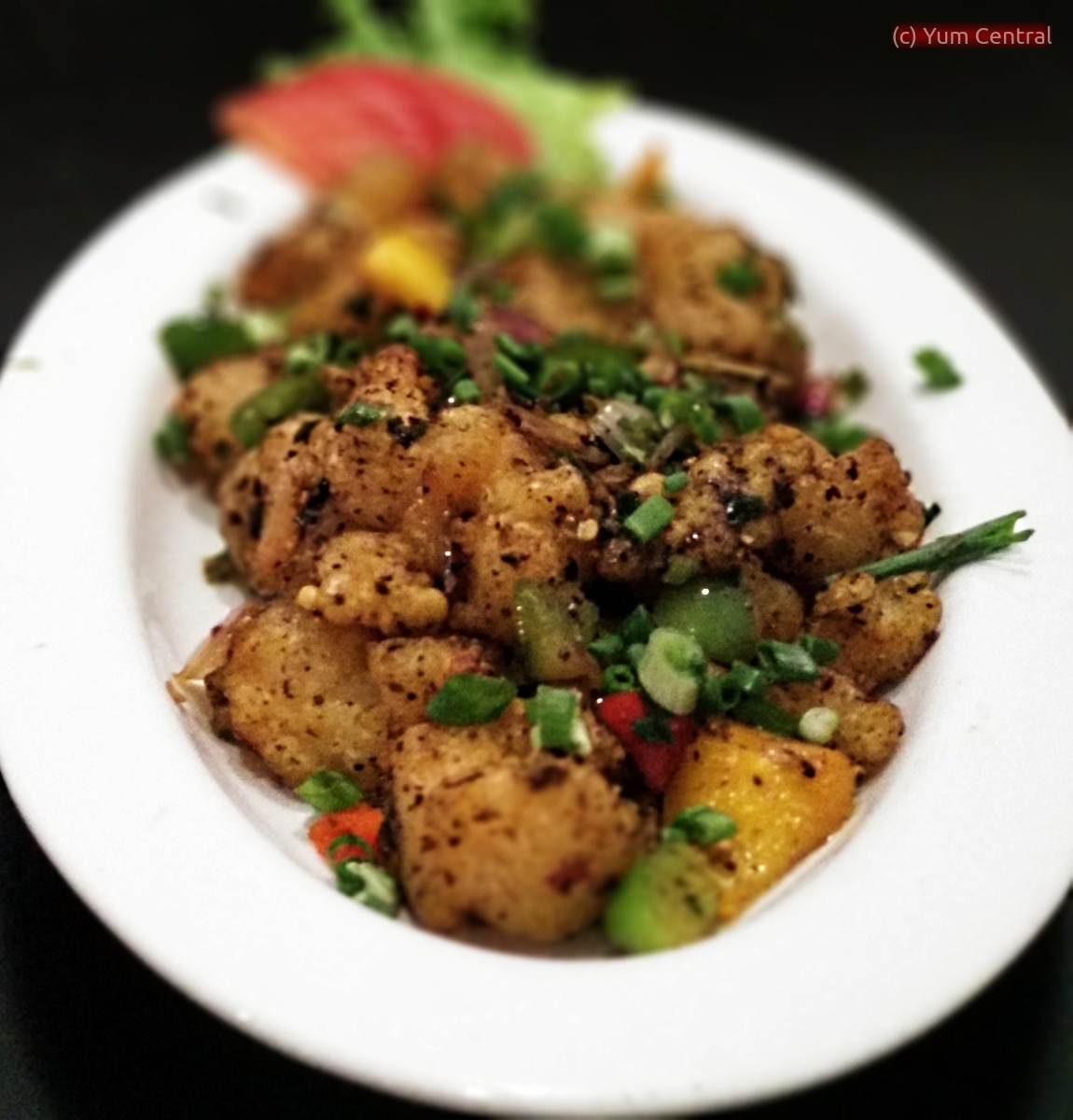 And then some standard fare: Chilli Paneer. Except that even here the ingredients had combined to take the taste a notch higher. Now paneer is not something you expect to be infused with flavours; that is a nigh-impossible task. But keep the pieces small enough and ensure that what covers them has enough taste, and bites off it become a real pleasurable experience!

Next up, some Prawn Sui Mai – which are momos or dumplings. This one was filled with succulently-flavoured prawns that left behind a lingering aftertaste that would make you crave for more. 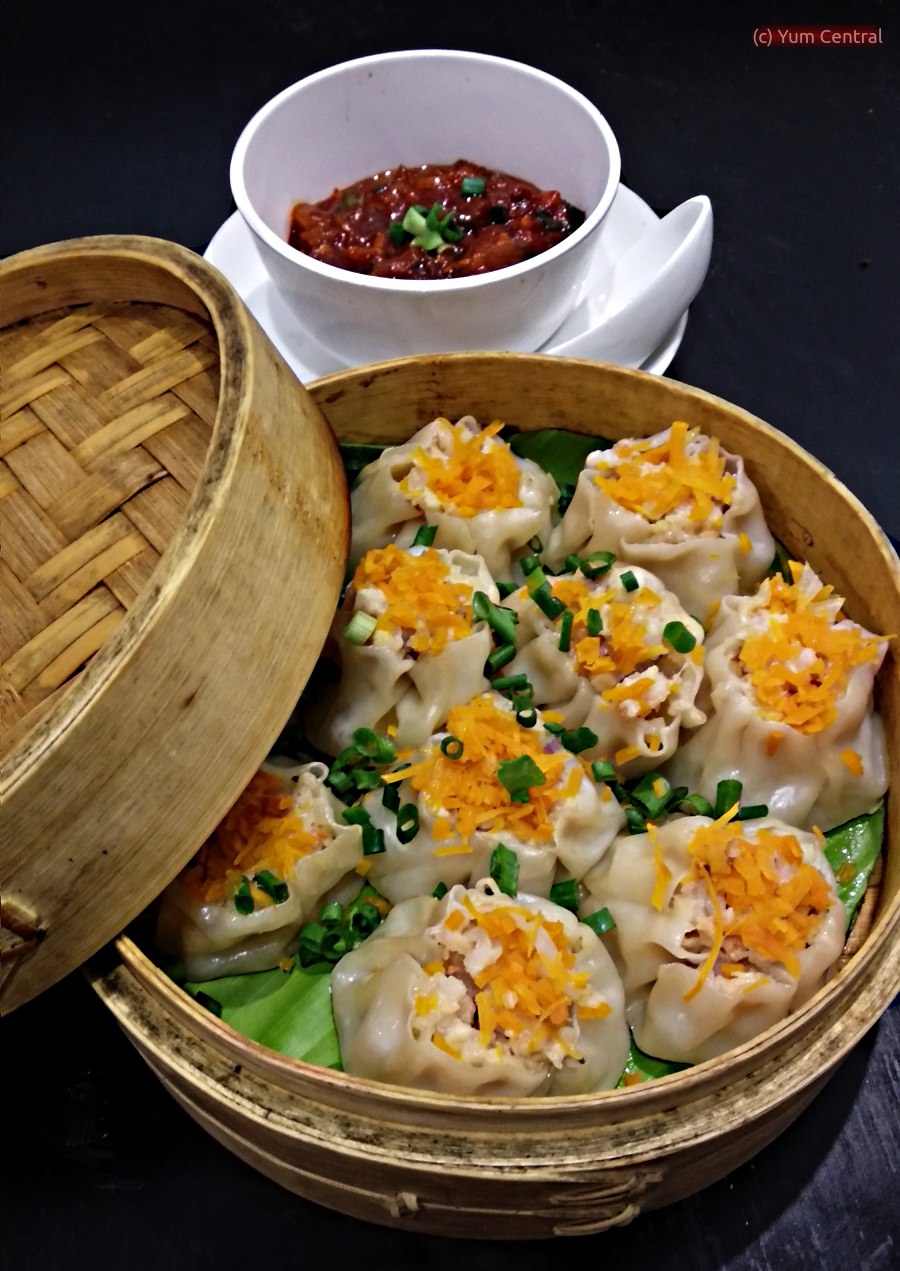 Then, some more paneer. This was Threaded Paneer, with the actual thing coated in crunchy threads. On its own the dish may seem a little bland, so accompanying it was some red garlic sauce – something that definitely tickled the palate! 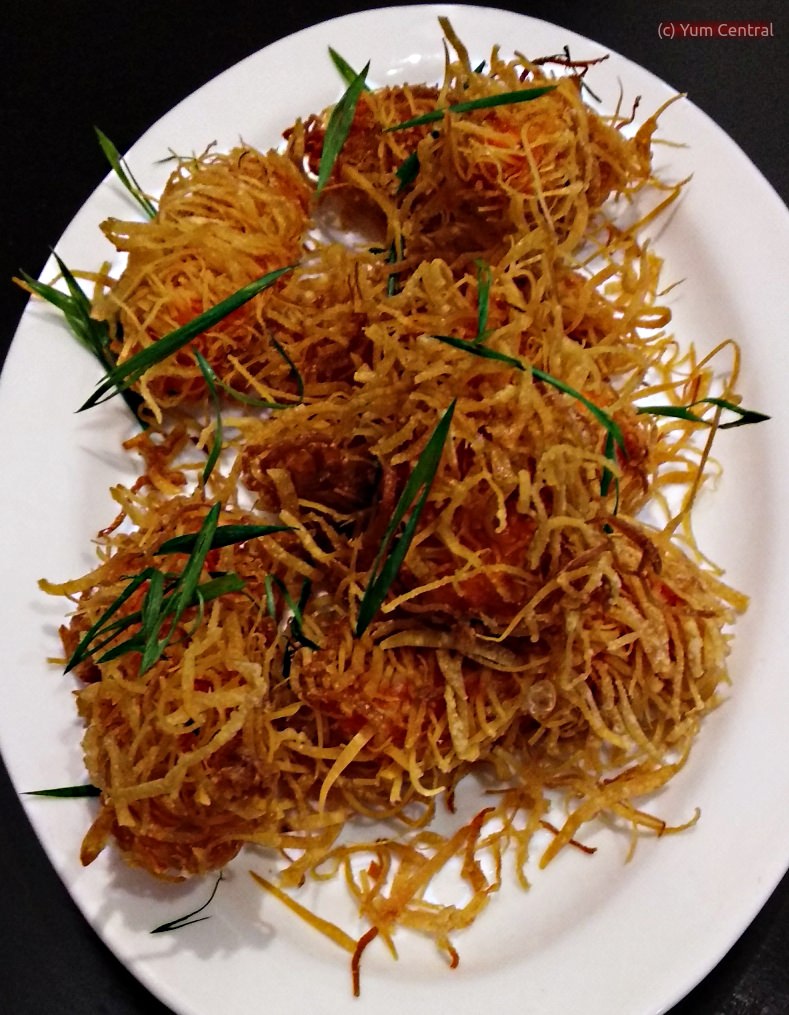 Up next was some more vegetarian fare, but we weren’t exactly complaining… This was Corn Salt and Pepper, seasoned in a tongue-titillating manner. 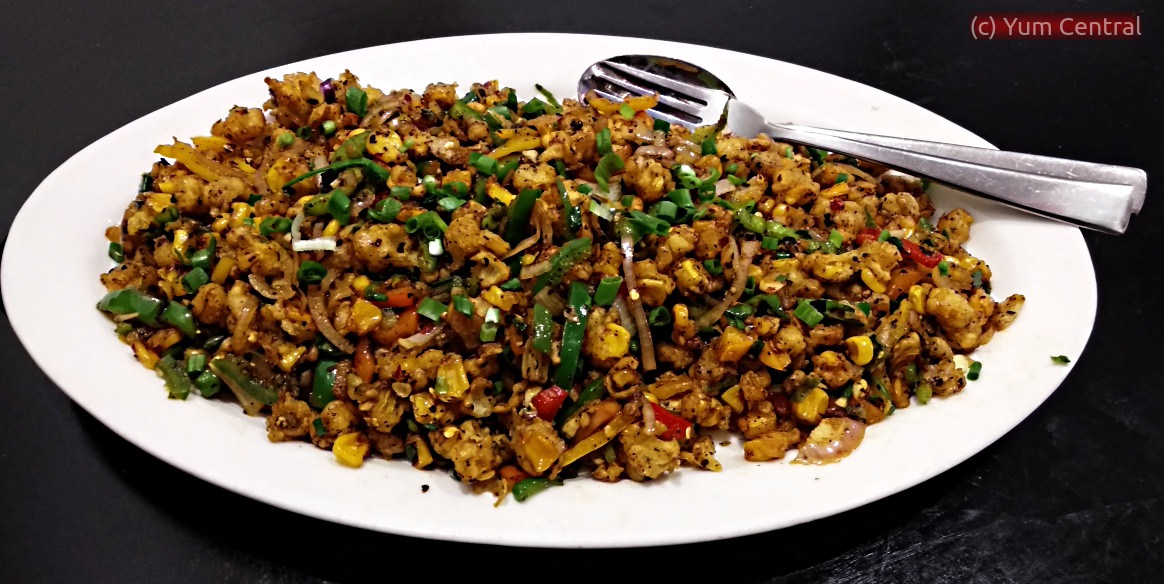 And then came something that immediately captured the show! This plate of Singapore Prawn was the cynosure for all of the few minutes it lasted. Imagine a lip-smacking covering on some succulent prawns that you could eat two whole plates of and still want more! 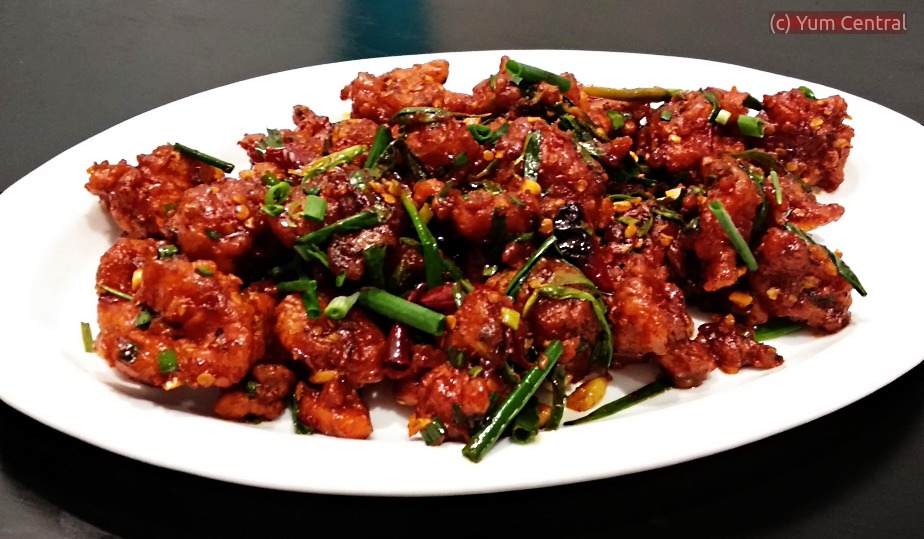 Next up: Fried Wontons. Per usual, these were not very savoury on their own. But pair them with the sauce they were served with, and you have a crispy, delicious treat on your hands! 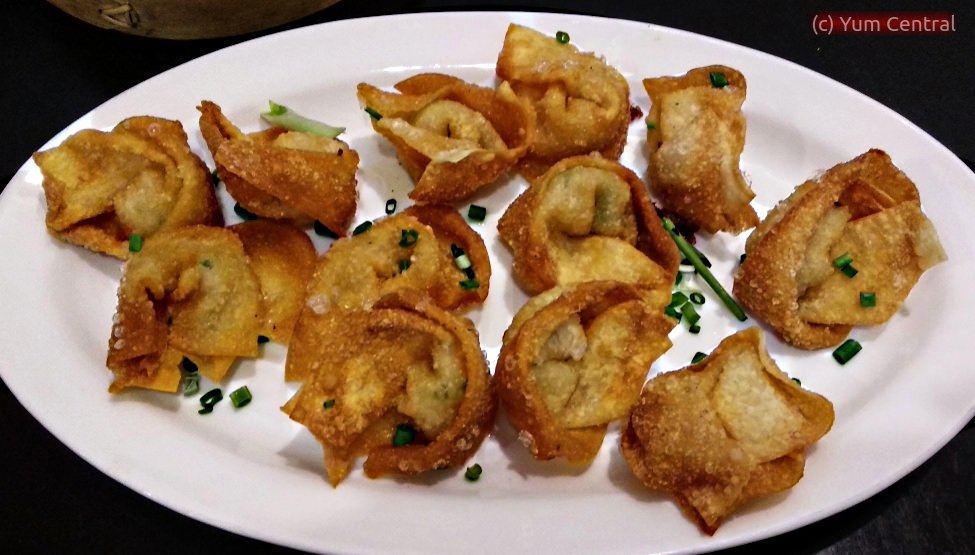 Moving on, we were served some Crispy Chilli Lamb, which would be a great dry accompaniment to any noodle or rice dish you ordered.

Then, some Pork Red and Green Chilli. The small strips of pork made for some delicious pairing with the alcohol that was being consumed. 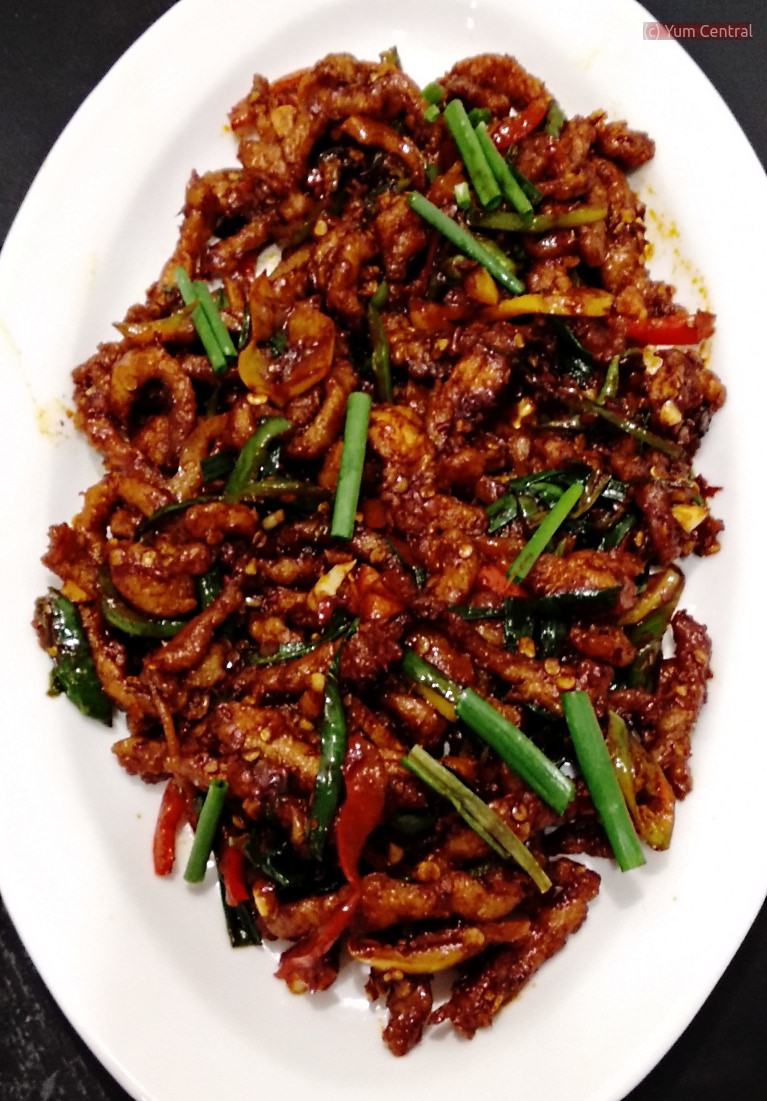 And then we had in front of us the final item in the starters: Chicken with Crackling Spinach. This was clearly the pièce de résistance of the entire starting course, but had some healthy competition from the Singapore Prawns. 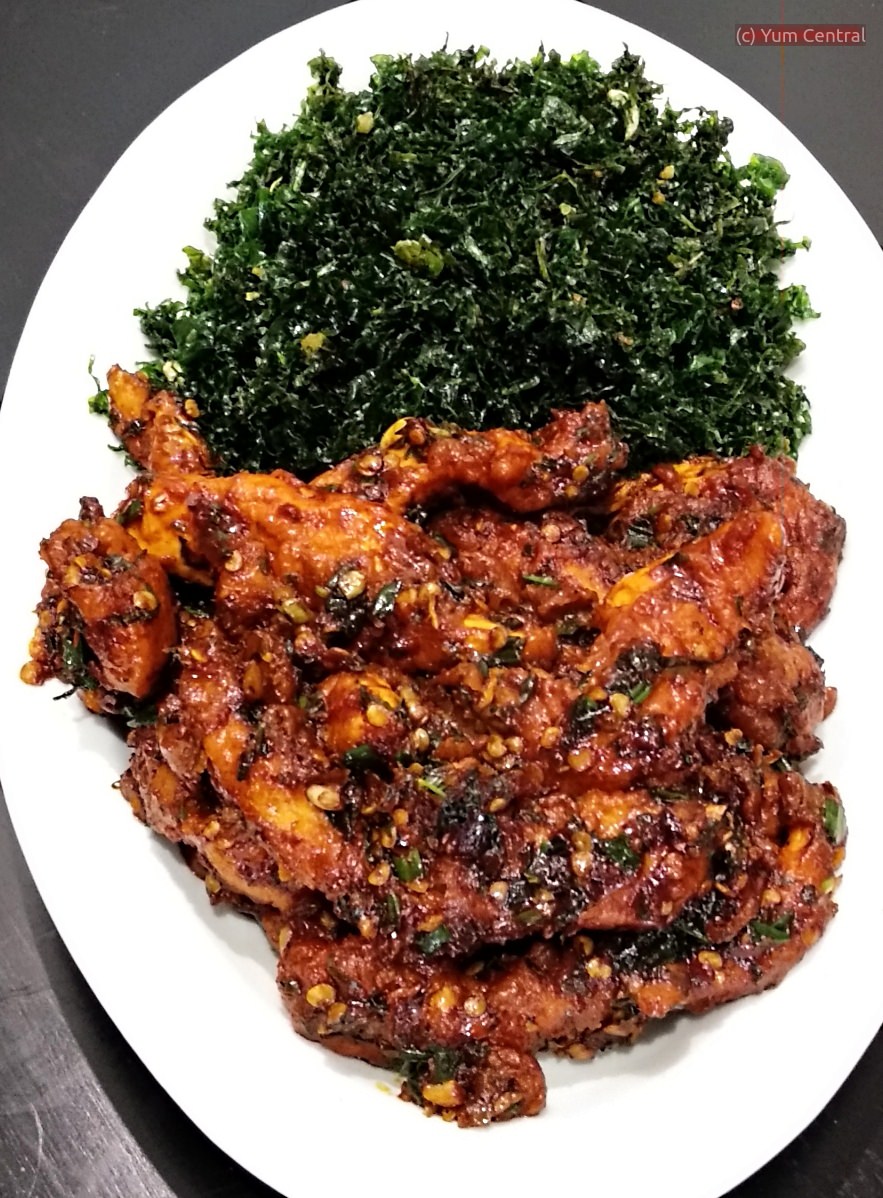 To be honest, we were too full by the time the main course came along. But then again that is anything but surprising. 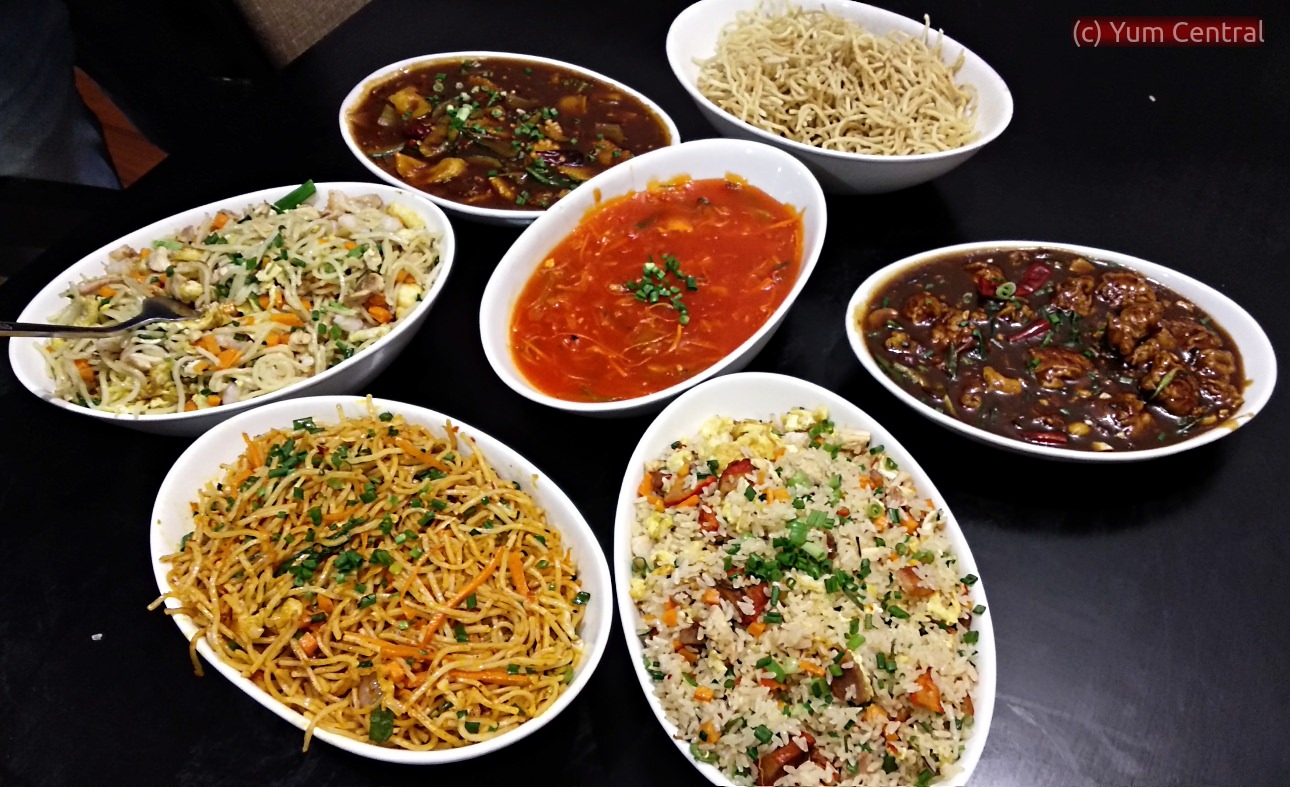 Clockwise from left, you have the Mixed Noodles without Pork, Hong Kong-style Vegetable, crispy noodles (to go with the Vegetable American Chop Suey in the middle), Hoisin Chicken, Mixed Fried Rice with Pork and Chilli Garlic Veg Noodles.

Sincerely speaking, these were indeed a cut above the notch. I especially recommend the Hoisin Chicken. However, if you think you might end up being too full – the portions all over are quite hefty – then order the fried rice or noodles with a dry starter of your choice, and you are peachy! 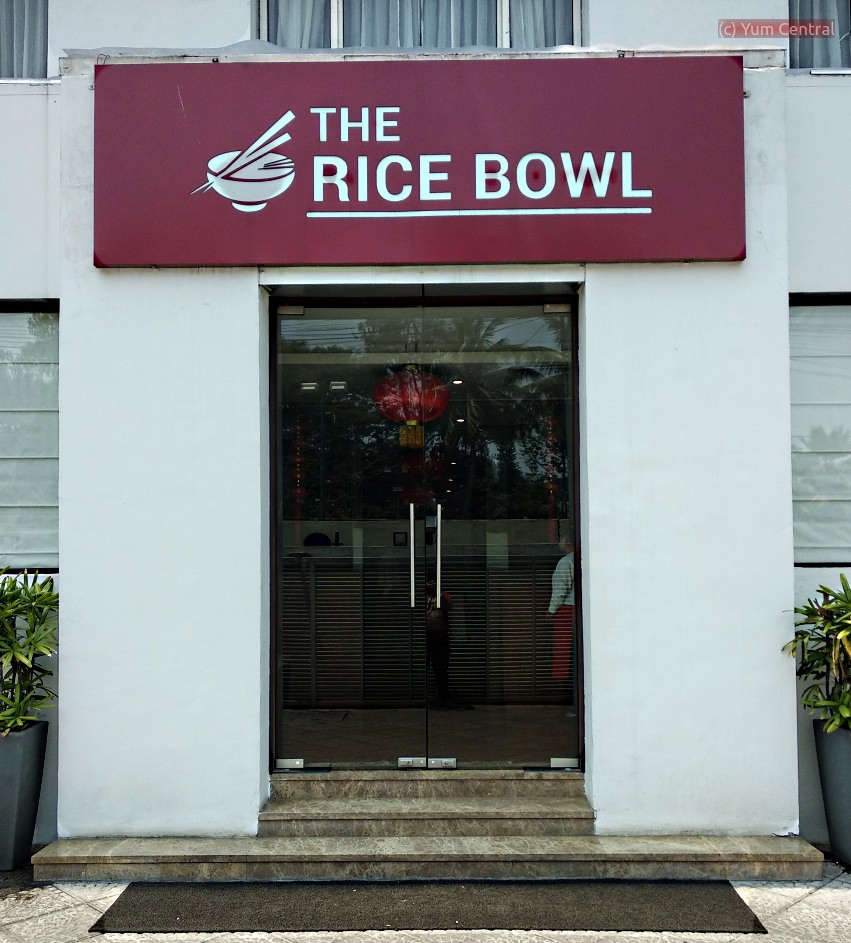 Now, I know I said we were full. However, there is always room for dessert. So we were prepared when it came – a Choco Lava Cake and some other chocolate cake dessert whose name I have forgotten now.

I will admit here that the desserts could have been better, but after the kind of fare we had already been served, we weren’t exactly complaining.

Especially after the Chinese tea we were served at the end. 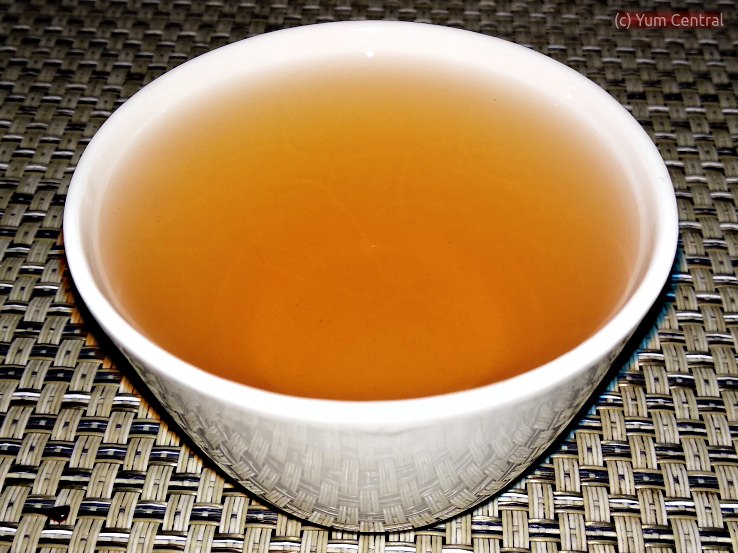 If you ever need a place to celebrate an achievement or have a family dinner, minus all the hubbub, with a little alcohol thrown in, Rice Bowl is your place. 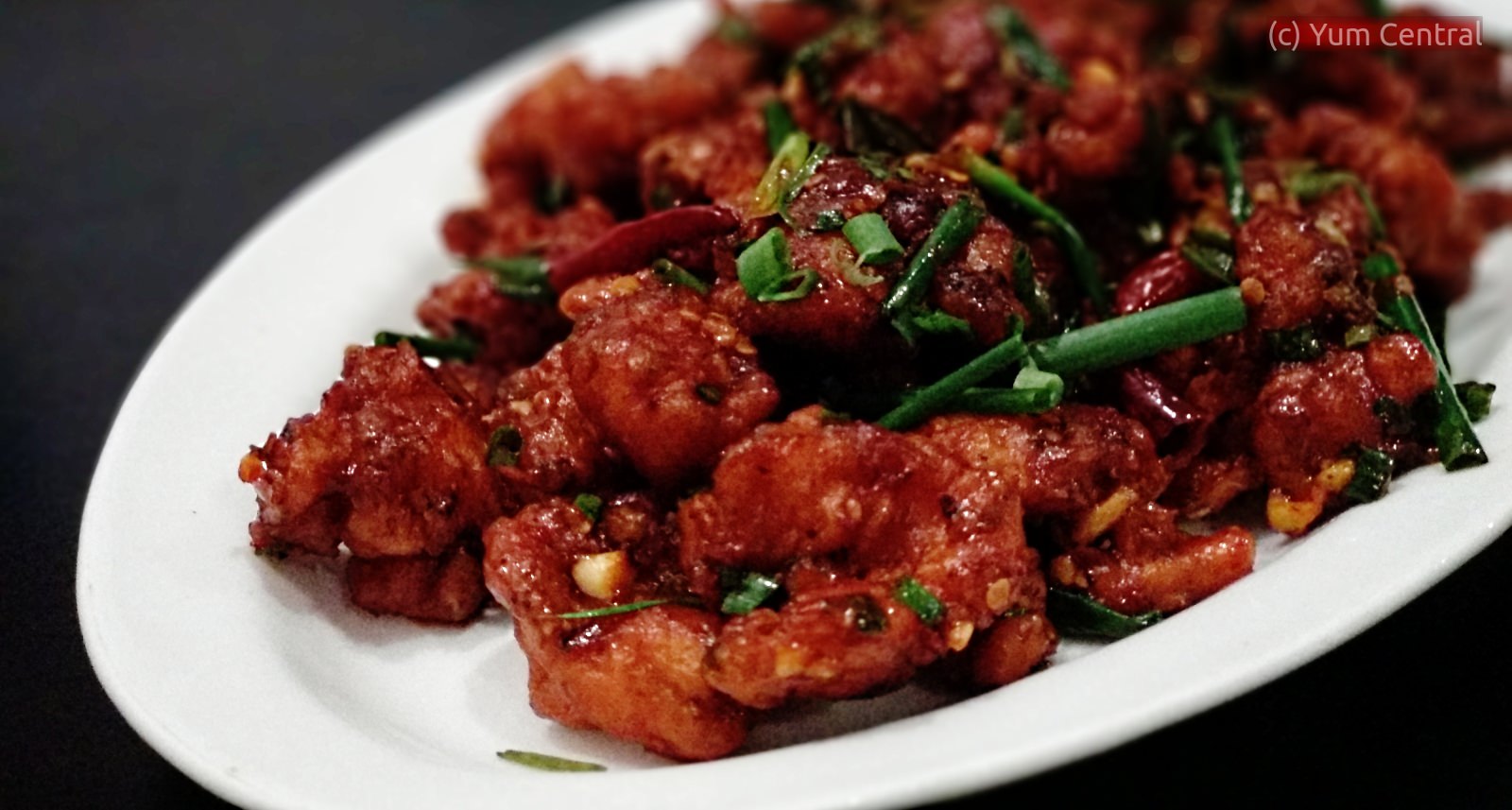 This is really a chill place that is happening in its own way. I wouldn’t mind taking my family for an outing here.

Have something to share? Drop us a message HERE, and we will get back to you immediately!